In a sudden spate of news articles, the London papers are going ga-ga over the work of some embroiderers, a 10' x 10' banner to decorate the royal barge, the Spirit of Chartwell, for the Queen’s Thames Diamond Jubilee Pageant next month.  The banner, of red velvet with gold fringe, has a Royal crown between the supporters of the Royal Arms - a lion guardant and a unicorn - above the Royal motto Dieu Et Mon Droit, all created, in “an opulent nod to the East End's pearly kings and queens” with gold-colored buttons of various styles and sizes and hand-sewn on with gold thread. 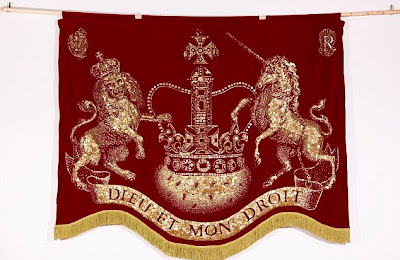 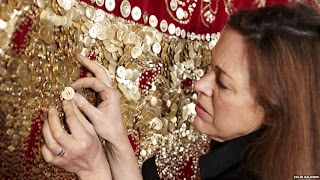 I especially liked the figures given in one of the stories about the banner:

5 seamstresses and 1 designer
4 months of sewing half a million (500,000!) buttons
250 sticking plasters for pricked fingers
3,000 cups of tea drunk while they sewed on the buttons
31 miles(!) of gold thread
250 needles used by the team

More detailed stories, with more photographs of the banner, can be found on-line at: