An Unusual Interpretation of an Achievement of Arms

Based on an interpretation of his achievement of arms, is Prince Charles the Anti-Christ? There’s a website out there that would have you believe so.

The website Mouth of the Lion by Jason Guenther http://www.thelowestroom.com/Jason/MouthOfTheLion/lionsmouth.htm discusses, among a lot of other things, the depiction of the achievement of arms of Charles, Prince of Wales and Heir Apparent to the throne of the United Kingdom, and how that achievement can be used to demonstrate, well, just all sorts of bad stuff. 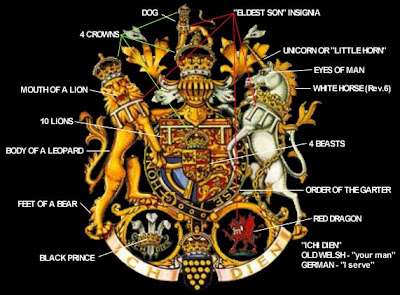 Mind you, I think he’s picking and choosing his evidence carefully, so that you notice what he wants you to notice, and he disregards other parts that don’t fit with his theories. For example, he points out the ten lions (on the arms of the United Kingdom and the Principality of Wales), but fails to include the rampant lion of Scotland, which would make eleven. (If we added in the lion supporter and the lion crest, we’d end up with 13!) He points out four crowns in the achievement, but fails to note a fifth one, ensigning the arms of the Duchy of Cornwall. (Oh, wait, here we go. He mentions the fifth one in the text. He must have forgotten to point it out in the illustration.)

Anyway, I thought it was an interesting misapplication, or misinterpretation, or at least misunderstanding, of heraldry today.