Where Did That Coat of Arms Come From?


A recent (June 10, 2015) article by Liz Coates on the website of the Eastern Daily Press helps to explain the origins of the current coat of arms of Great Yarmouth in England. 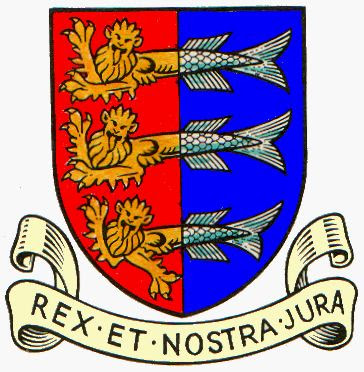 One might think that they are simply a variant of the various arms of the Cinque Ports (most of which dimidiate the Royal arms (red with the three lions passant guardant) with ship hulks (on the blue side), but the story here is actually a little more complex than that.

The article, entitled How did Yarmouth get its half-lion half-fish coat of arms?, notes that the arms go back to the Battle of Sluys on June 24, 1340 (675 years ago this month) when Yarmouth supplied King Edward III the majority of the ships used by him in this naval battle.  As the article goes on to note:

Afterwards hailing the contribution of men and ships from Yarmouth Edward allowed the town to half its coat of arms of three silver herrings and add his own three lions, elevating its standing and providing an arresting heraldic emblem.

Thus in several ways the battle was a key point in the town's history.

You can find out a little more of the background of the Battle of Sluys as well as some of the ways in which the town is commemorating it this year on the website of the Eastern Daily Press at
http://www.edp24.co.uk/news/how_did_yarmouth_get_its_half_lion_half_fish_coat_of_arms_1_4106429

"Wrong" State Flags (Some With Heraldry)


There's an illustrated article on the Washington Post website by Alexandra Petri and posted on June 23, 2015 whose title really caught my eye:


Every state flag is wrong, and here is why

In the article, Ms. Petri illustrates each of the fifty state flags in the United States and then humorously pokes fun at them.  A few examples follow, beginning with my own state of Texas:

“You mean this isn’t taken yet?” Texas asked. “How is this not taken? This was literally the first thing I thought of.”

While several state flags have heraldry on them, some are more blatantly rip-offs of other heraldry.  North Dakota's flag, for example:

“Shhh, if we put a big crown on the top and write ‘NORTH DAKOTA’ on the bottom, no one will notice that we stole this entire design from the Seal of the United States.”

And then, of course, there's Virginia:

"Just when I thought it couldn’t get worse, Virginia happened. Virginia, do you know there’s a dead guy on your flag? 'Yeah,' Virginia says, shrugging nonchalantly. 'That’s what we do to tyrants here. Kill them, and then we pose for pictures on their corpses.' Don’t mess with Virginia."

If you'd like to see the rest of the state flags - heraldic, quasi-heraldic, and non-heraldic - along with her comments, please feel free to visit the Washington Post website at http://www.washingtonpost.com/blogs/compost/wp/2015/06/23/every-state-flag-is-wrong-and-here-is-why/


... it has been shown that you can find heraldry everywhere!

It may not necessarily be accurate heraldry, but it is heraldry nonetheless. Take for example .... 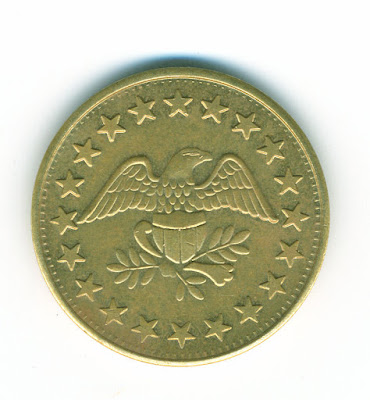 This was a token to be used at a shooting gallery at the National Boy Scout Museum in Irving, Texas, where we went with one of my grandchildren the other day (because he wanted to buy a local Boy Scout Council patch).  The Museum is far larger than I had expected, and had a lot of interesting stuff to see.  And do.

One of those things was a shooting gallery with rifles which fired a laser pointer.  If you hit various targets with the red laser light, different things would happen: a can would jump, a pair of boots would "dance," a sign would spin around, and so on.

At the front desk where you paid your admission, they would give you a token to use to activate the rifle you wanted to use.  On the obverse is a rendition of the arms of the United States of America (Paly of thirteen argent and gules a chief azure).  Sort of.  The eagle, instead of supporting the shield, appears to be perched upon it; he also faces to sinister.  The shield itself consists of four "pales" rather that the paly of thirteen it should be.

As an example of the arms of the United States, I'm afraid it falls a bit short, and I have to say, along with the obverse of the token: 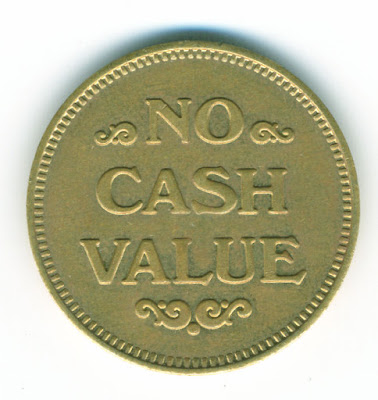 In Honor of International Heraldry Day


In honor of International Heraldry Day today, I changed my profile picture on Facebook to this shot of me wearing the only hat that I could find in Dublin, Ireland with a coat of arms on it. 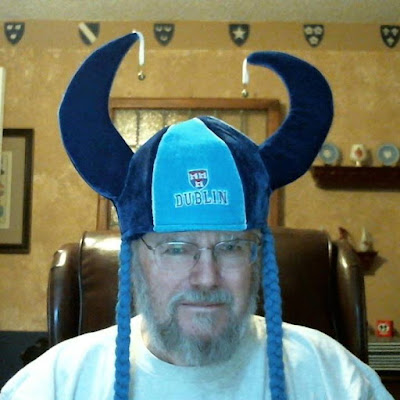 The shield is, of course, the arms of Dublin.

But to think that I had to buy this to get some "wearable heraldry."  (Aside from the tie that I found there with the arms of the four provinces of Connacht, Leinster, Munster, and Ulster scattered regularly across it.)  Still, the bells hanging from the tips of the horns are a nice touch, don't you think?  Not to mention the blue braids.

Posted by David B. Appleton at 3:49 PM No comments:

Email ThisBlogThis!Share to TwitterShare to FacebookShare to Pinterest
Labels: Ireland

What are you going to do to help celebrate the Wonderful World of Heraldry today?


International Heraldry Day is tomorrow, June 10, 2015, and in honor of the occasion, I thought I would repost a number of the coats of arms (and arms-like logos) that I have found in and about Dallas, Texas over the years.  So here for your viewing pleasure (or in some cases, "pleasure") are the following: 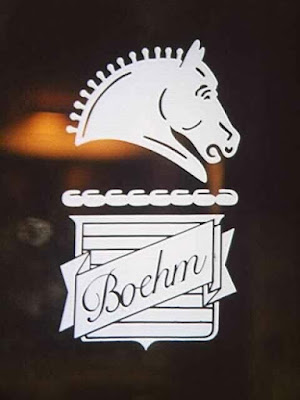 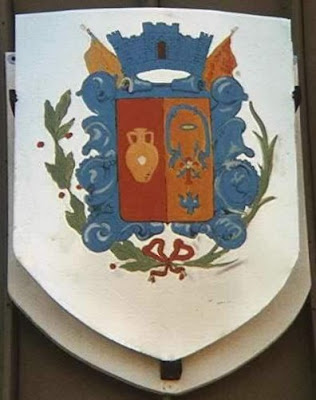 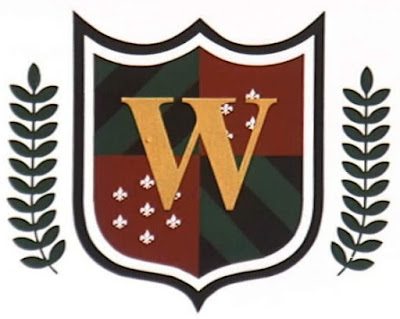 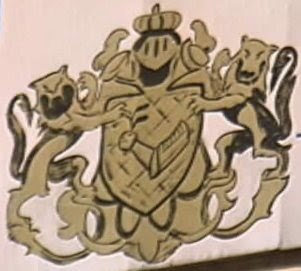 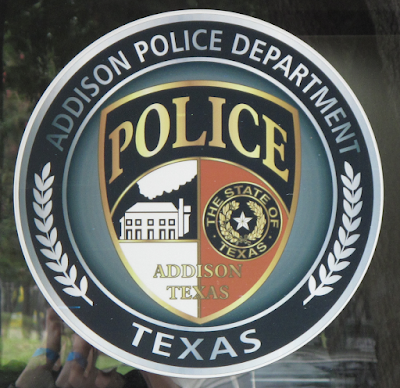 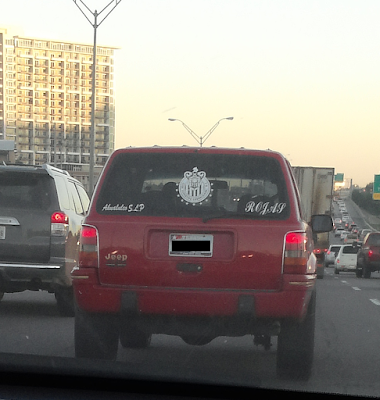 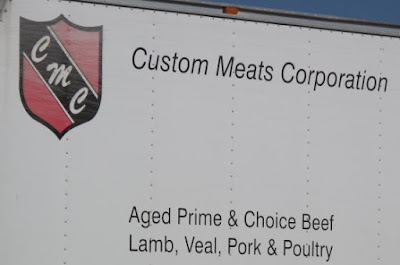 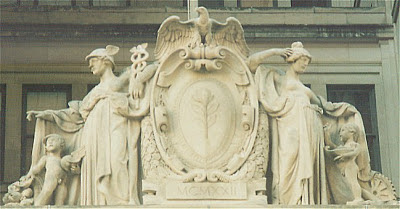 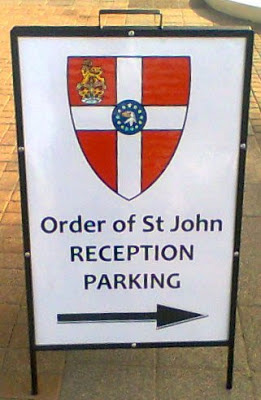 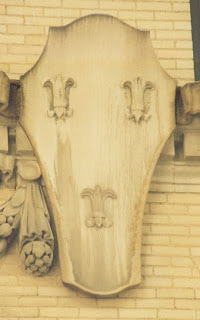 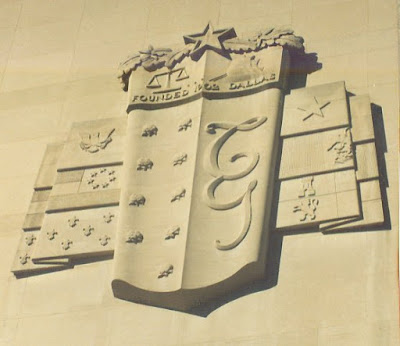 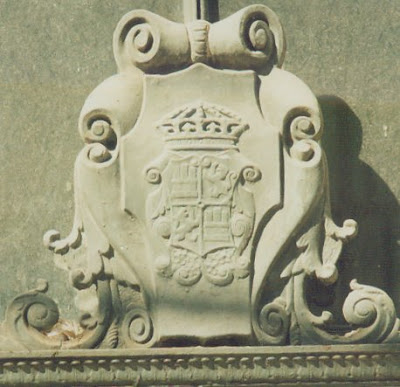 
International Heraldry Day this year will be on Wednesday, June 10, 2015. 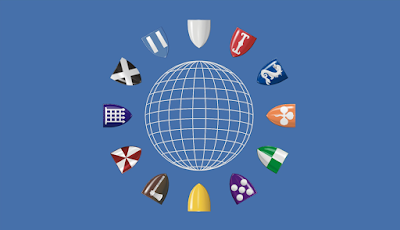 On June 10 in the year 1128, in Rouen, was knighted by his future father in law Henry I Beauclerc, Godfrey Plantagenet.  Suspended during the ceremony on the neck of the young knight was a shield of blue decorated with six golden lions, which is recognized by most heralds as, for the first time in history, a fully-formed coat of arms. 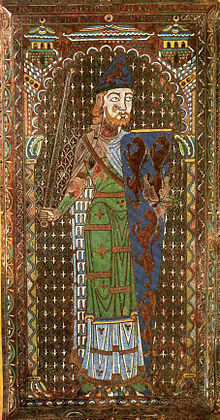 This same shield was later borne by Geoffrey's grandson, William Longspee, which is what leads heralds to recognize it as the first true heraldry.

Heraldry was defined by the late Sir Anthony Wagner, Garter Principal King of Arms, as "the systematic use of hereditary devices centred on the shield."  Hence, its hereditary nature, descending in family lines, is an essential part of what distinguishes heraldry from being simply designs painted on shields.

So, what are you going to do to mark this special occasion?

Everything You Wanted to Know (and More) ...

I ran across a really great article the other day by J.A. Shapira entitled "The Signet Ring Primer" with a concise history of, and the use of, signet rings, both heraldic and otherwise.  Profusely illustrated.  The synopsis of the article is:

For centuries signet rings have been one form of jewelry for men serving a very productive role in society. Here we explore that role.

The article itself was posted last September; I have no excuse for not running across it sooner, except that there are only so many hours in the day, and so very much internet to be explored, that I can't get to it all as fast as I would like.

In any case, I've found it now, and am sharing it with you.

The full article, and all of its pictures, can be found on the website of Gentleman's Gazette at http://www.gentlemansgazette.com/signet-ring-primer/