There's an article this morning from the Carmarthen Journal about one of the participants in the Thames Diamond Jubilee Pageant for the Queen this coming weekend. 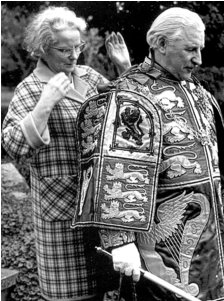 The individual being highlighted is Thomas Lloyd, Wales Herald Extraordinary, who will participate with the other members of the College of Arms (and others, including the Chief Herald of Canada, Claire Boudreau, who will be there in her new tabard) in the Pageant.

The article not only gives some background about "Tom," but includes a number of his comments about the tabard he wears, as well as the (older, made in Victorian times) tabards worn by the heralds in ordinary of the College of Arms.  For example, I didn't know that if they get wet (as he notes they did once at a Garter ceremony at Windsor), they have to be dried out very slowly over the course of a year.  He also notes that the tabards are "very valuable things — one isn't allowed to keep it in one's own house."

The article is a fascinating peek at some of the behind-the-scenes stuff that we seldom hear about regarding the College of Arms, its organization, and its tabards.  You can find the entire article on-line at: http://www.thisissouthwales.co.uk/Tom-s-heraldry-role-puts-prime-position-Queen-s/story-16225987-detail/story.html
Posted by David B. Appleton at 9:24 AM