Apropos of my post of April 23, relating to the heraldry of the HBO series Game of Thrones, I ran across a website that asks, and then will answer for you, the question, "What Is Your 'Game of Thrones' Warrior Name?"  The plug for it stated: "Discover your inner warrior and badass reputation in Westeros with our 'Game of Thrones' name generator."

So, though I've so far managed to avoid the series, and the books it is based on, I went out to see what my Warrior Name is, and received the following: 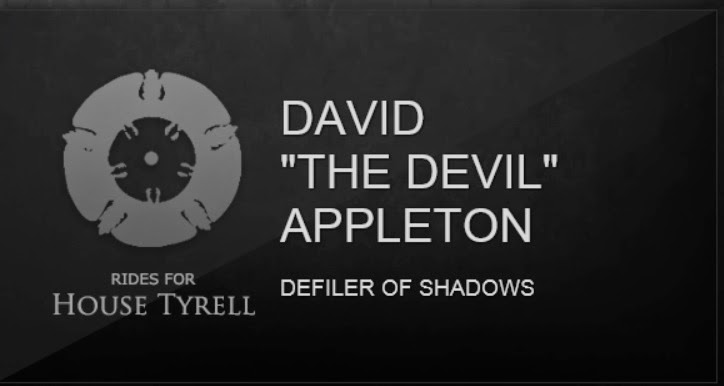 So, now you know better than to mess with me!  ;-^)  (Note tongue firmly planted in cheek there.)

And just for grins, I went ahead and put in my persona name in the Society for Creative Anachronism, and learned that that warrior name is Da'ud "The Serpent" ibn Auda, Betrayer of Secrets.  Da'ud also rides for House Tyrell, so at least I'm consistent.

Anyway, if you'd like to learn what your Game of Thrones warrior name, and its accompanying house "heraldry," (because this is, after all, a blog about heraldry!) you can find out on-line at http://www.zimbio.com/generator/d_rN-Gyttd2/What's+Your+'Game+of+Thrones'+Warrior+Name?i=DQcNb-Veqln&t=o1-xi6gfe1B

This Blog Is Mentioned Again


It's always gratifying to find that this blog has been well spoken of somewhere on the internet.  Some recent correspondence from heraldic artist Dr. Antonio Salmeron of Madrid, Spain, included a link to a page on his website at http://www.blason.es/heraldica/enlace.html, where he says some very nice things about this blog, among others, including that of fellow heraldic blogger Kimon Andreou of http://www.idtg.org/ 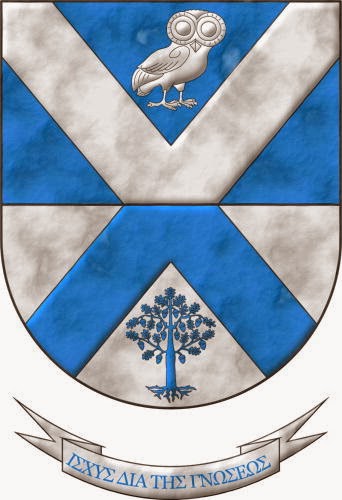 Dr. Salmeron also included on that page his rendition of Kimon's coat of arms, above.

He additionally sent a link to another page on his website (http://www.blason.es/armorial/appletondavidb.html) where he gives his own take on, and uploaded his rendition of, my personal arms (below). 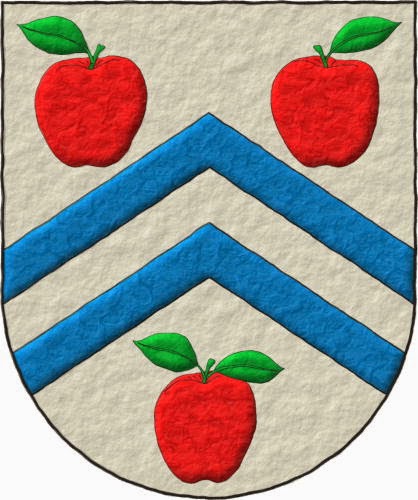 Even if you do not read very much Spanish (and you can always use the Bing Translator or some similar auto-translation program to at least get the gist of what he is saying, whatever your first language might be), Dr. Salmeron's website is an interesting one to visit and wander about in, even if just to see the coats of arms he has drawn there.

And, of course, it is personally very flattering to have been mentioned by another heraldry enthusiast.

Email ThisBlogThis!Share to TwitterShare to FacebookShare to Pinterest
Labels: Spain


For those of you who are interested in such things (my wife is getting a bit hooked on the series, though I have managed to manfully resist it to date), there's an interesting article by Brian Copperman over on the Pro Heraldica USA blog entitled "Game of Thrones - Family Crests & Rich Heraldry" which discusses the heraldry and house emblems which can be found in the HBO series Game of Thrones (based on the books by George R.R. Martin). 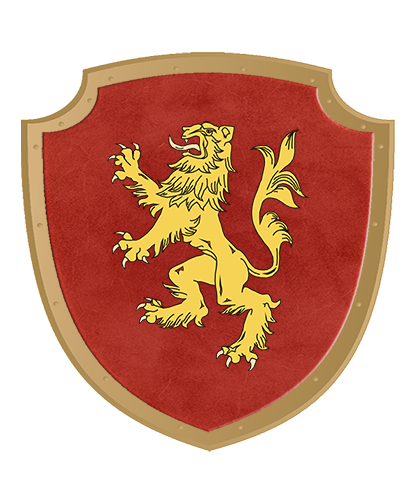 It's a great little article that shows the power of heraldry, even in the world of fiction.  Please feel free to drop by the Pro Heraldica USA blog and check out all of the heraldry of the houses in this series presented there.  It can be found on-line at http://proheraldica.com/blog/game-of-thrones-family-crests/

Tempest in a (Scottish) Teapot


In an April 18, 2015 article entitled "Call to arms over threat to Scottish club badges" on the website of The Scotsman, reporter Colin Telford "warns that many Scottish football emblems could actually be illegal."

It seems that last July, Airdrieonians Football Club received a letter from the Lord Lyon's Procurator Fiscal (a public prosecutor specially assigned to the Lyon Court) informing the club that its badge had been deemed to be "an heraldic device". This was the start of a chain of correspondence which ultimately required the club to sign an irrevocable undertaking that it would cease to use its badge from 1 September 2015.

But the real issue here is not just about Airdrie. The ruling also applies to the majority of Scotland's senior football clubs, as well as rugby clubs, golf clubs, schools and other such organisations.

In other words, there's a whole lot of sports clubs and organizations which have been using arms or arms-like logos which have not been registered with the Lyon Court's Register of All Arms and Bearings in Scotland, and are therefore technically being used illegally.

This has, of course, stirred up quite a bit of controversy, as well as comments from a number of individuals who have no knowledge nor understanding of the functions of the Lord Lyon King of Arms.  The number of comments to this article which speak of Scotland being a "democracy" (as if that has anything at all to do with the law as it stands in Scotland) or dragging that "pompous old windbag" (the Lord Lyon) "into the 18th century never mind the 21st."

There are, fortunately, a few cooler heads also involved in the discussions, who note that all of these clubs are "virtuous and well deserving" under the Lyon King of Arms 1672 Act, and that they "should take up the opportunity to be recognised as part of Scotland's proud heraldic tradition. "

It's an interesting article, giving some background of the controversy, the Lyon Court, and some of the rules that heraldry, or arms-like logos, must abide by in Scotland.  And, of course, the comments are an amusing mix, too.

You can find the complete article, and commentary, on the website of The Scotsman at http://www.scotsman.com/sport/football/latest/call-to-arms-over-threat-to-scottish-club-badges-1-3746851

The Prince of Wales Feathers


Over on the Royal Central website there is a fairly recent (March 24, 2015) article entitled "Not just a feather in the cap: a brief explanation of The Prince of Wales feathers" by Cindy Stockman which goes into the design, history, and usage of the ostrich plumes and crown badge of the Prince of Wales. 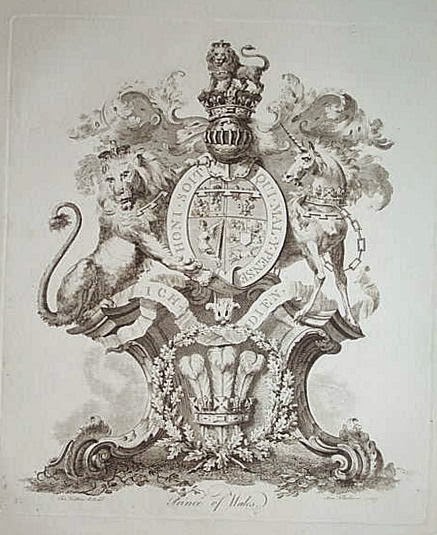 (The badge is below the shield and within an oak wreath in this depiction of the arms of the Prince of Wales done about 1800.)

It's a nice article, full of facts and factoids, and gives one of the best, and most concise, discussions of this royal badge that I have seen.

You can find the full article on the Royal Central website at http://royalcentral.co.uk/blogs/not-just-a-feather-in-the-cap-a-brief-explanation-of-the-prince-of-wales-feathers-46542