In a post on the Facebook page for the Canadian Heraldic Authority earlier today, there’s a picture of the new tabard that the Royal Heraldry Society of Canada is donating to the Chief Herald. 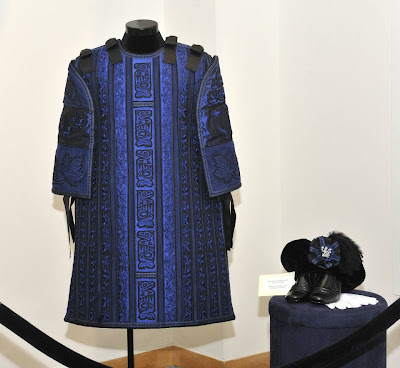 Entirely in royal blue, the tabard uses the colour emblematic of the governor general of Canada. ...The shield of the Royal Arms of Canada is embroidered on the tabard’s sleeves. The raven-bears on the central stripe are inspired by the supporters of the arms of the Canadian Heraldic Authority and honour the emblematic traditions of the First peoples. The stripes of alternating maple leaves, the quintessential national emblem of Canada, occupy the rest of the front and back of the tabard.  The tabard will be worn with the collar of office of the Chief Herald of Canada, in addition to white gloves and a hat decorated with the viceregal lion, being the crest of the Royal Arms of Canada and the emblem of the Governor General.


The tabard is a very nice piece of work, and not entirely traditional (generally, tabards have the arms on all four panels of the tabard: front, back, and both sleeves), but that is certainly in keeping with the way the CHA has adapted heraldic traditions for use in Canada and under the Canadian constitution.