I realize that many of you may have seen this already; it appears to be big news to some folks and I’ve seen it reported a number of places in the past two or three days.

It seems that Her (British) Majesty’s Government is doing a bit of “re-branding” and all the government departments, except for departments who currently have an “heraldic badge or crest,” such as the Home Office and the Ministry of Defence, are going to be using a “digital-friendly” version of the Royal Arms (including supporters and crest).  A spokesman for the Cabinet Office was quoted as saying: “We have developed a new consistent approach to our identity which comprises the royal crest alongside the relevant organisation name.”

Here’s a look at the new color scheme to be applied to the Royal Arms to be used by each department: 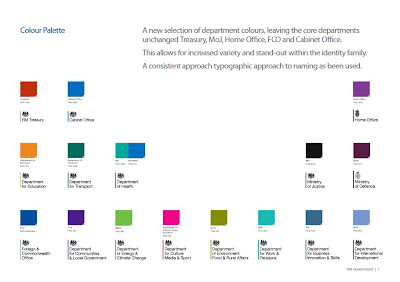 Departments would also have some of  “auxiliary icons ” – a crown and a Union Jack – for use in certain situations, such as for overseas correspondence,  “or when the RCoA is not recognised by the desired audience. ”  (Really?  Well, yeah, okay, I suppose there are those here and there around the world who might not recognize the Royal Arms but would recognize the flag.  I would hope, however, that none of those folks are heraldry enthusiasts!)

While I think that the whole scheme of using a single logo in different colors can be a worthwhile one, and has the potential to save the taxpayers of Great Britain some money at the same time (if everyone’s using the same logo, just in different colors, there is certainly the opportunity for some economy of scale there), I really do wish that they’d stop calling the Royal Arms “the royal crest.”  But I suppose that’s a battle I may never win.

Additional reading about this new change can be found at: