This next item is a photograph of a piece of memorabilia relating to a company that went out of business well before I was researching and photographing for my presentation in 1998. 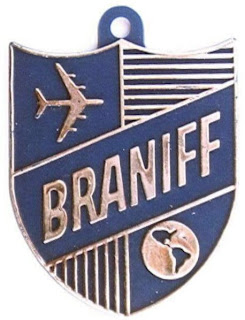 Braniff International was a Dallas-based airline from 1930-1982, with two successor companies using the name from 1983-1990 and 1991-1992.  At one time it was a leader among airlines, painting its planes in bright colors and using fashion designers to design uniforms for its flight attendants, but it wasn’t able to survive the government’s deregulation of the airline industry.

There are, of course, no tinctures marked on the piece, and I doubt that we can assume that the second quarter is hatched for azure (blue) and the third quarter for gules (red), but it makes for an interesting quasi-heraldic design with the jet airliner and globe in the first and fourth quarters.