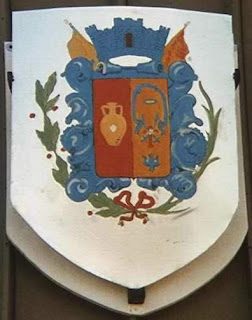 These are the arms of La Tasca Española, a Tex-Mex and Spanish cuisine restaurant north of downtown Dallas.  Their coat of arms logo even looks Spanish, doesn't it?  (Despite being painted on the squarer French-style shield.) 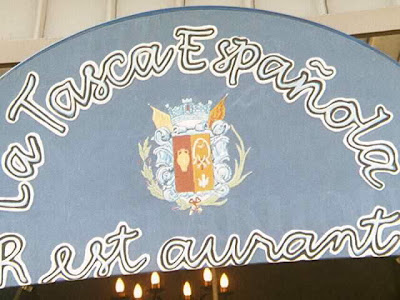 Surprisingly enough, given how much turnover there is in restaurants in the area, La Tasca Española is still open for business today, so if you ever get a hankin’ (as we say down here) for some decent Tex-Mex cuisine, now you know where to find it.

And to help you get there, here’s the logo of the Phillips 66 brand of gasoline.  (Or petrol, for my British friends.)  Gules the numbers 66 and on a chief argent the word Phillips sable. 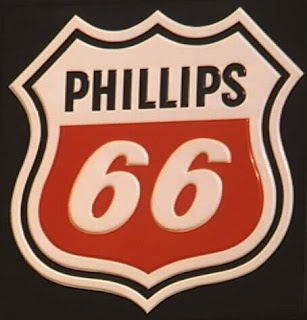 The Phillips Petroleum Company was founded in 1917 in Bartlesville, Oklahoma, and is now a part of the ConocoPhillips Company.  (Not unlike how Dallas-based Mobil Oil Corporation is now a part of ExxonMobil.  If this keeps up, some day there will be only one gasoline company in the world, but it’ll have a really, really long name!)  In 1927, the company was testing a new formulation of gasoline in a car on U.S. Highway 66.  (Yes, the "Route 66" of song.)  The car was doing 66 miles per hour (106 km/h).  So they decided to name the new fuel Phillips 66 and placed the name on the same shield shape as those marking U.S. highways.  And we’ve been stuck with that name ever since.