Compliments from a Fellow Heraldry Enthusiast

Peter Harling over at the Modern Armorial Bookplates website (the URL can be found below in this post and also in the left-hand column in Websites of Heraldic Interest section of this blog) has said some very nice things about some homemade bookplates I sent him.

In addition to being active in a couple of the heraldry newsgroups and forums that I also frequent, Peter collects armorial bookplates (in addition to having some very nice ones of his own), and offers to exchange his personal ones with anyone who wishes to send him theirs in return.  I recently took him up on his offer, and he's posted them on his site, along with some complimentary comments.  (Here's one, the most "modern" looking one, of the three bookplates I sent him.) 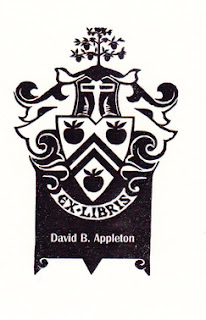 I will only say that I don't know how much I deserve his praise, since I have never considered myself an heraldic artist.  I do find it wonderful what can be done on a compter these days with some good heraldic clipart and a color laser printer.  I appreciate his kind words, and recommend his website to anyone who is interested in heraldry, bookplates, or heraldic bookplates.  Modern Armorial Bookplates can be found at http://armorialbookplatesmodern.weebly.com/ and the bookplates I sent him, along with submissions from other folks in recent weeks, can be found by clicking New Additions in the left-hand column there.
Posted by David B. Appleton at 6:31 PM