Okay, we've just gotten back from a two-week trip to England, attending the 36th International Congress of Genealogical and Heraldic Sciences held in Cambridge, and moving on to York for a few days so that my wife could visit the church where her 9th great-grandfather was baptized in August 1610, almost exactly 412 years ago.

It was wonderful to be traveling again, to visit with old friends and meet some new ones, and, naturally enough, to see and photograph a lot of heraldry!
It may take a little while to get through all of the pictures: I took over 2,100 during the trip, and Jo took about 900 more. That said, some of mine were taken while I was wandering about on my own and were of things I knew she would be interested in, and many others are duplicates, because I find that if I want to be certain of getting a good, clear photograph of a shield, I need to take two, or even three, pictures of it; and the majority of hers are not of heraldry, unless she saw a coat of arms she knew I'd want and probably wouldn't get on my own.
So there's a lot of sorting to be done, weeding out the fuzzy, out-of-focus pictures, and then categorizing them properly. I mean, in Cambridge you will find the arms of one or another of the colleges in perhaps a half dozen different places. So getting them all sorted properly will be a bit of a task.
In the meantime, however, I will say that one of the reasons I enjoy traveling to Europe is because in a lot of places you can find wearable souvenirs with the coat of arms of the city, etc., on them. (Not everywhere, though. Yes, I'm looking at you, Glasgow! It was very disappointing; you can see the arms of the city on buildings, sidewalks, trash bins, etc. all over the place, except in the souvenir shops. Not even a key fob, for crying out loud. The closest thing I could find was a cap with the saltire flag and the word "Scotland" on it. Sure, I bought it, but only under protest because there was nothing better.)
Anyway, Cambridge University and the city of York did better by me, and I have brought home the heraldic items you see below; the cap to go on the shelf in the closet with the other armorial caps I have, and the two tee shirts to go into the not-quite-overflowing-just-yet dresser drawer of armorial tee shirts. (The oldest one in that drawer is a Université d'Ottawa/University of Ottawa tee with the arms of the University on it that I bought when the International Congress was held there in 1996, and which I still wear on occasion.)
Anyway, rejoice with me in these, my latest acquisitions of wearable armorial souvenirs. 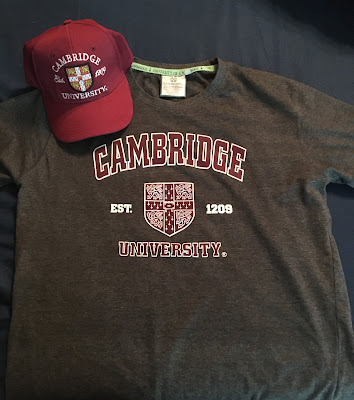 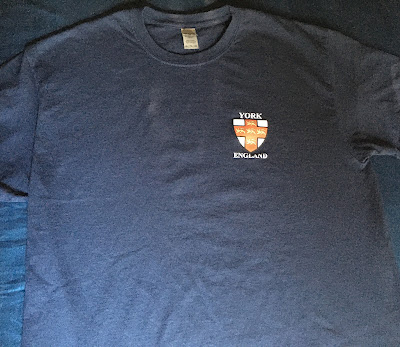