Continuing our look at the arms of the Colleges of Cambridge University along the front of the train station in Cambridge, and still going from right to left, we come to the arms of:

Jesus College (we'll be seeing more of these arms in later posts). The arms are basically those of the founder, John Alcock, Bishop of Ely. In 1575 the College was granted a crest as an addition to the arms 'of longe tyme borne'. The mitre on the fess is person to John Alcock, and the red border charged with gold crowns is from the arms of the See of Ely; 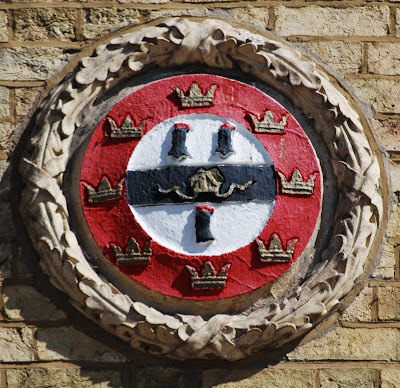 Queens' College. The arms are those of Margaret of Anjou, Queen to King Henry VI, differenced by a border, and were granted to the College in this form in 1575; 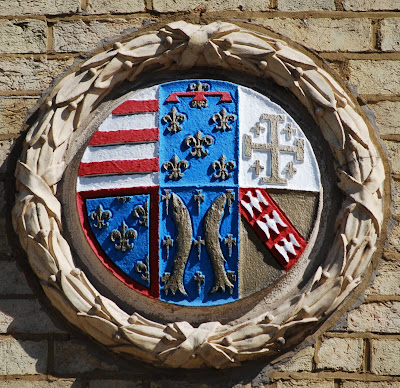 Corpus Christi College. The College resulted from the union of two guilds of Cambridge, Corpus Christi and the Blessed Virgin Mary. During the Reformation, some people took offense at the then arms of the College, Archbishop Matthew Parker, Master of Corpus Christi in 1544 and 1553, obtained a new grant of arms in 1570 from Robert Cooke, Clarenceux King of Arms, in the present form; 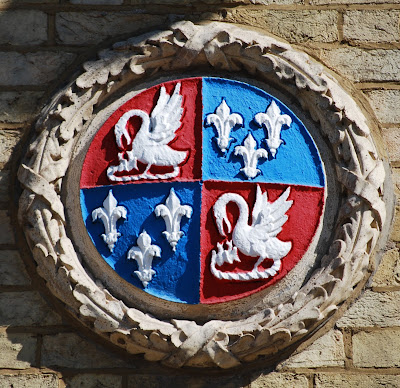 Gonville and Caius College (Caius is pronounced "Kees", and you should be grateful it's not Cholomdeley, pronounced "Chumlee". No, really!). The College was founded in 1348 by Edmund Gonville, Rector of Terrington, the first founder, and Dr. John Caius, the third founder. Their arms are Gonville impaling Caius, all within a border compony sable and argent. (Yes, the Caius arms are very complex: Or semy of flowers gentle, in the middle of the chief a sengrene resting upon the heads of two serpents in pale, their tails knit together, all in proper colour, resting upon a square marble stone vert, beetween their breasts a book sable garnished gules, buckled or); 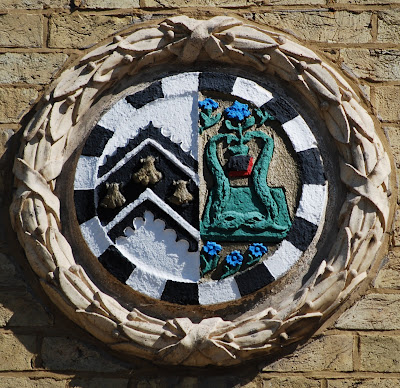 Clare College (we'll be seeing more depictions of this coat of arms, too, since the conference we attended was held at Clare College). The arms are those of the College's Patroness, Elizabeth, Lady of Clare, a cousin of King Edward III, on the dexter side (as her own honor and inheritance were superior to that of her husband, impaling the arms of her first husband, John de Burgh, all within a bordure sable goutty d'or, the black bordure with golden tears being adopted by her as a sign of mourning following the death of her third husband; 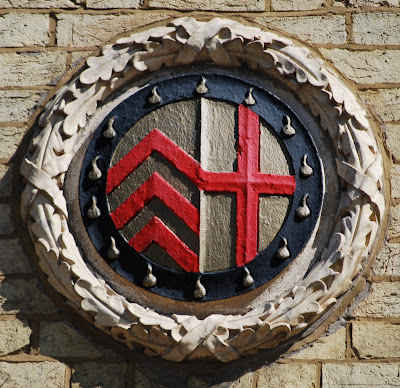 (on the façade of the train station, the arms of the City, University, and four local dignitaries appear here) and Peterhouse College. The arms were granted in 1575, and are based on the arms of the founder, Hugh de Balsham, Bishop of Ely. The College's arms are those of the Bishop differenced with the red bordure charged with gold crowns taken from the arms of the See of Ely. 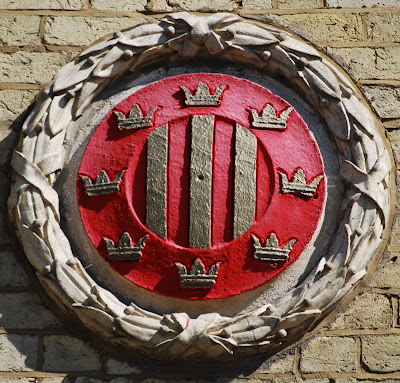 Next time, more College arms from the train station!
Posted by David B. Appleton at 2:00 AM