Variations on a Theme


Cambridge, being a good-sized city in England, and even more, one with a considerable bit of history and patronage by kings, queens, and royal relatives, can boast a lot of depictions of the Royal Arms of the United Kingdom and of England, in various media and covering a span of centuries, with many of the changes that have been made to those arms over the years.
The first one that we saw, being the closest to our hotel, was a very modern depiction of the Royal Arms as currently used by HM Queen Elizabeth II over the door of the Cambridge Magistrates' Court: 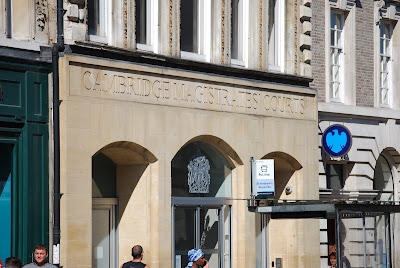 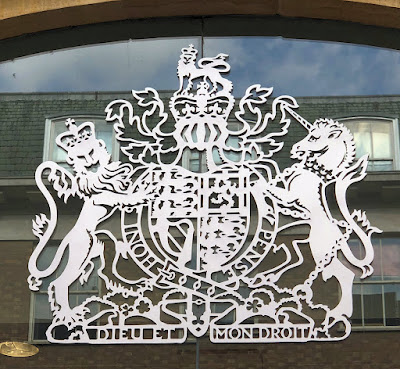 We found an older version -- well, okay, several older versions -- of the Royal Arms on the great gate of Trinity College, with its statue of the College's founder, King Edward III, and his several sons: 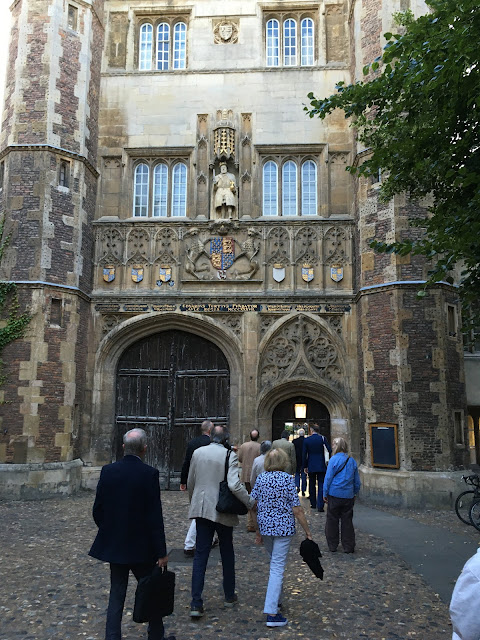 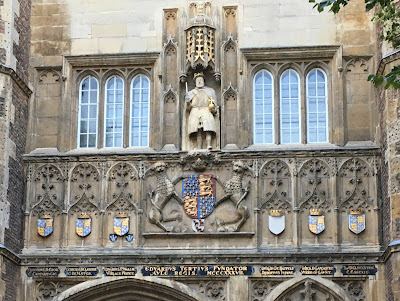 I must say, though, that the statue of Edward III looks a lot like King Henry VIII, but maybe that's just me, because it clearly labels him as Edvarvs tertivs fvndator (Edward III, Founder) with the date 1337, well before Henry VIII's time. 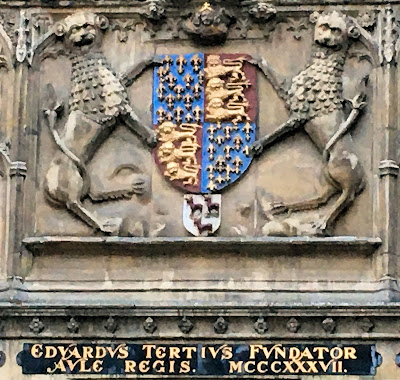 Here's a close-up of the row of shields:

You can click on the image above to see a full-size photograph.
The arms of King Edward III are in the center, supported by two lions rampant guardant. The other shields are, from left to right:
Edmund of Langley, Duke of York;
Lionel of Antwerp, Duke of Clarence;
Edward, Prince of Wales, the Black Prince;
William of Hatfield, who died as an infant;
John of Gaunt, Duke of Lancaster; and
Thomas of Woodstock, Duke of Gloucester.
Those of you familiar with English history, the Wars of the Roses, or Shakespeare's historical plays will recognize many of those names.
Inside Trinity College, facing the courtyard, is another impressive gate, also with a statue of King Edward III (and this one looks a lot more like him!) along with two depictions of the Royal Arms (Quarterly France modern and England), one of England impaling France modern on a cartouche, and two of England (Gules three lions passant gardant in pale or). 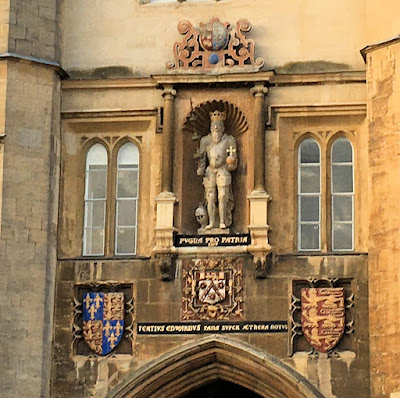 Directly over the doorway and just below the statue of Edward III is the arms of Trinity College, Argent a chevron between three roses gules barbed and seeded proper and on a chief gules a lion passant gardant between two closed books all or.
Elsewhere, we find the same Royal Arms as used by King Henry VIII and some of his predecessors in several different places at King's College, originally founded by King Henry VI.
Over the main gate to Trinity College (and these may very well be the arms of Henry VI, pre-dating Henry VIII): 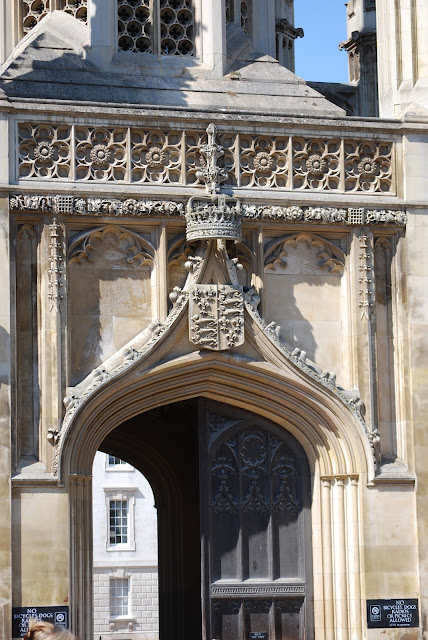 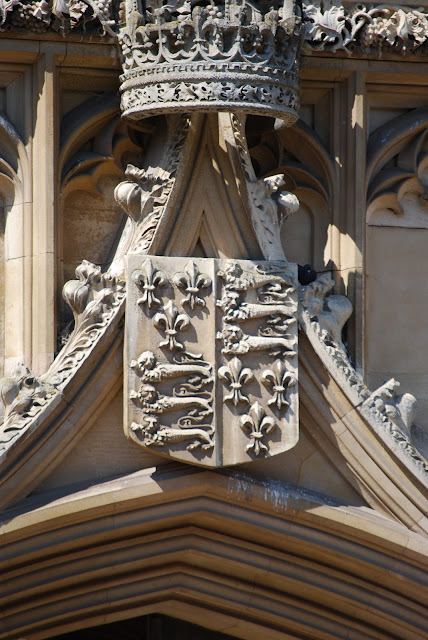 And in the Great Hall at King's College (these are definitely the arms of King Henry VIII. Notice the crown over the arms in the window, and the red dragon and silver greyhound supporters of the carved and painted arms): 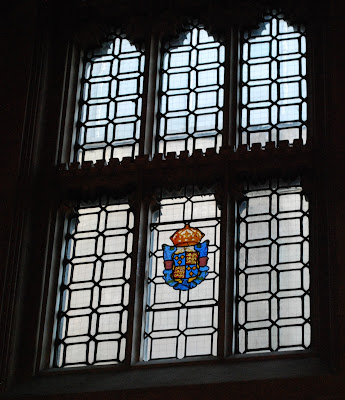 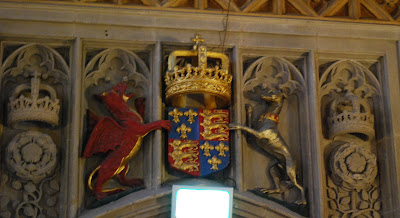 All in all, a nice selection of Royal Arms, Plantagenet, Tudor, and Windsor, in a variety of media, and with both versions used by King Edward III (with the French quarters of the arms being Azure semy-de-lys or and Azure three fleurs-de-lys or).
It's almost enough to make me want to go back and rewatch Shakespeare's historical plays. (Yeah, like I need an excuse to do that! And I've got two sets of those plays - Richard II through Richard III - the 1960 Shakespeare's An Age of Kings and the 2012-2013 The Hollow Crown. Great stuff! Highlights include a young Sean Connery as Hotspur in the earlier series, and Benedict Cumberbatch as Richard III in the later series. But I digress!)
I hope that you have enjoyed these examples of the Royal Arms from Cambridge!
Posted by David B. Appleton at 2:00 AM