Having covered the non-College arms on the façade of the train station in Cambridge, England, last time (the City of Cambridge, Cambridge University, and four local dignitaries at the time the station was opened in 1845), this post, and the next three following, will cover the arms of individual Colleges that appear on the walls of the station.

Unlike last time, where we went from left to right, for these other train station posts I am going to go in the order in which the photographs were taken, that is to say, right to left. 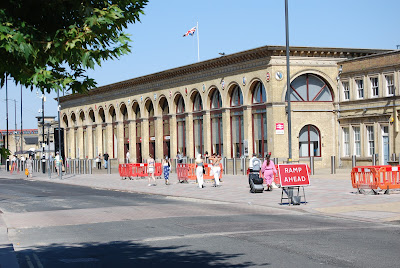 I am doing it this way only because it's a little easier for me to do them in the order they were taken, rather than the reverse. But it's my blog, and I'm allowed to be a little lazy if I feel like it.
Anyway, from right (beyond the frame of the picture above) to left, we have the arms of:
Girton College. These arms were granted in 1928, and the charges and tinctures are taken from heraldic insignia associated with four individuals concerned in the founding of the College: Mr. H.R. Tomkinson; Madame Bodichon (née Leigh Smith); Henriette Maria, Lady Stanley of Alderley; and Miss Emily Davies: 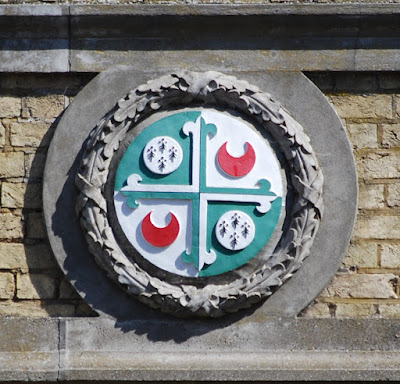 Fitzwilliam College. The arms were granted in 1974, but were long used by the College's predecessor, Fitzwilliam House, an organization for non-collegiate students: 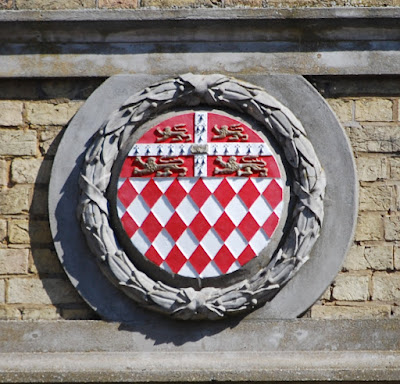 Downing College. The arms were granted to the College in 1801, and consist of the arms of the founder, Sir George Downing, 3rd Baronet, differenced by the blue border charged with white roses: 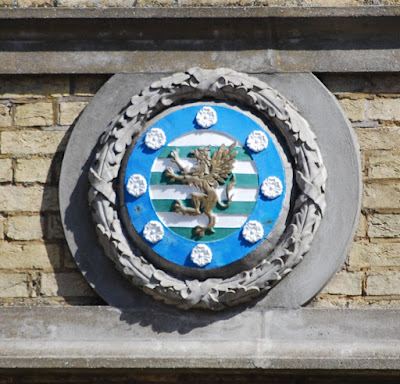 Emmanuel College. (We'll be seeing more of the arms of Emmanuel College in later posts.) The arms were granted in 1588, following the Royal Charter from Queen Elizabeth I and Deed of Foundation in 1584. The lion is taken from the 'ancient arms' of Mildmay (the College was founded by Sir Walter Mildmay) allowed by Robert Cooke, Clarenceux King of Arms, to the founder on evidence now regarded as suspect: 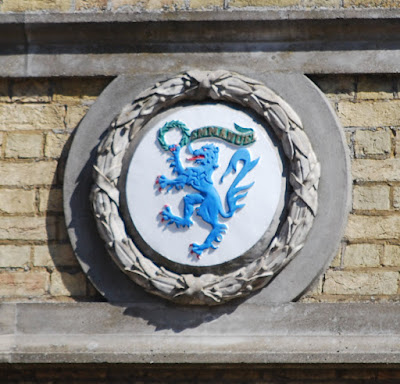 Trinity College. The arms were attributed to Trinity College in Parker's Catalogus (1572), and they were recorded as the arms of the College by Robert Cooke, Clarenceux King of Arms in his Visitation of 1575; 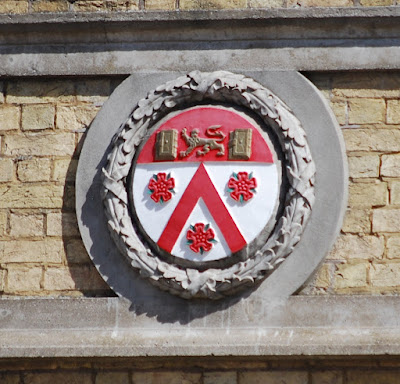 and Sidney Sussex College. The arms are those of the foundress, Lady Frances Sidney, Countess of Sussex (Radcliffe impaling Sydney). These arms were granted to the College in 1675: 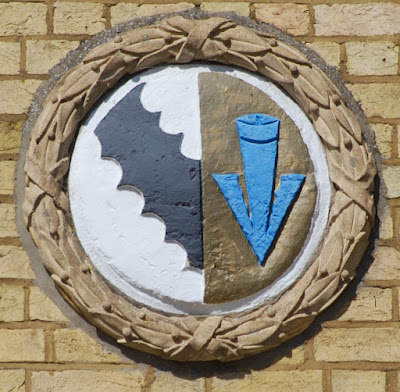 Next time, more Colleges!
Posted by David B. Appleton at 2:00 AM