There and Back Again: A Trip to Merrie Olde England


So, having recently returned from our trip to England (Cambridge for the 35th International Congress of Genealogical and Heraldic Sciences, with a couple of side trips, and York, with a side trip), we're back at home, mostly recovered from the unaccustomed exercise and jet lag, and I'm starting to go through all of our pictures to see what is worth sharing with you.

The trip was not without its challenges. We learned, for instance, having already pretty much finalized our travel plans, that there was to be a one-day train strike on the day we were to go from Cambridge to York. The likeliest alternative to a train was a bus, or in this case, three separate buses, involving a journey of somewhere between 7½ to 9 hours, with the two of us, four pieces of luggage, and her rollator. Well, that didn't seem very attractive. In our twenties, perhaps, but now that I'm closing in on a venerable 3/4 of a century, not so much. Fortunately, as we have learned over the years, there are very few problems that you can't solve adequately by throwing a little more money at them, and so we ended up hiring a car and driver. Sure, it cost an arm and a leg (which I hope will grow back before too long), but it was a comfortable, comparatively short (2½ hours) ride, and our driver picked us up at the door of our hotel in Cambridge and dropped us off at the door of our hotel in York. My wife says she now understands why rich people hire cars and drivers.
And it was hot while we were there. Not quite "Texas hot", but only about 10º (F) cooler than back here at home in the Lone Star State.
Nonetheless, we persevered, and we had a great time seeing many of our friends again, and meeting and making new friends, as well as attending a number of interesting presentations on aspects of heraldry and of genealogy (plus giving one, which I considered a successful one because of all the questions and comments following it).
As I said, we were in Cambridge, and Cambridge is what we here in the States call "a college town", full of old buildings (and newer ones), with a lot of heraldry to be seen there (mostly the arms of Cambridge University and its various colleges).
But the City of Cambridge itself has its own coat of arms, granted in 1575 and slightly modified by adding a helmet and mantling and making a slight change to the crest to make it look more like a bridge and less like a castle in 1974.
The arms are blazoned Gules a bridge of one arch surmounted by three towers or in chief a fleur-de-lys or between two roses argent the base barry way argent and azure thereon three ships each with one mast and yardarm the sail furled sable.
The City's arms can be found in a number of places about the city in a number of different media: carved, cast, printed, and painted.
Here, it appears on one of a number of plaques marking sites of historical interest and importance to the city. 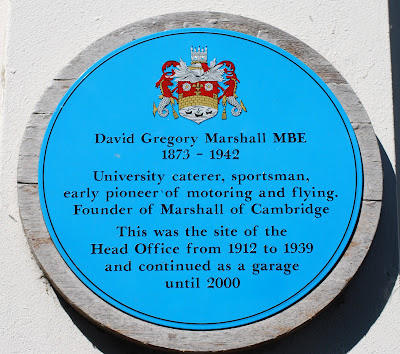 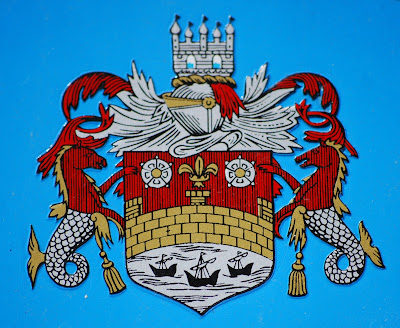 Here, amongst the arms of the University and its Colleges (we'll be taking a closer look at all of these in a later post) on the façade of the train station. 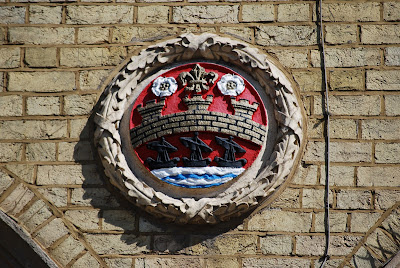 And in the taxi rank outside the train station: 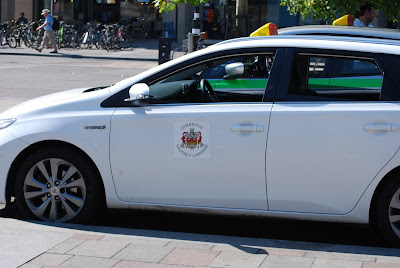 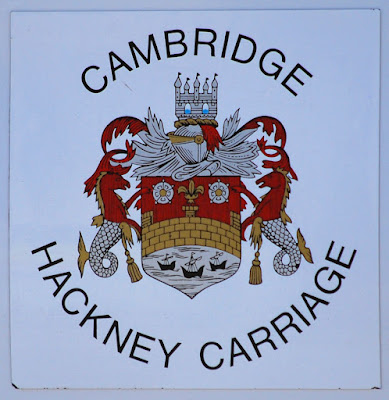 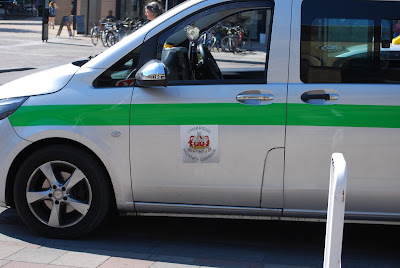 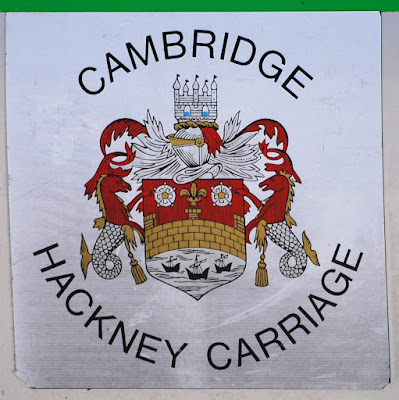 On the City's Guildhall. Is that a great entrance door or what? (The painter seems to have missed painting in the argent (white) parts of the barry wavy argent and azure base, just as the historical plaque and Hackney Carriage depictions seem to have left out the blue!) 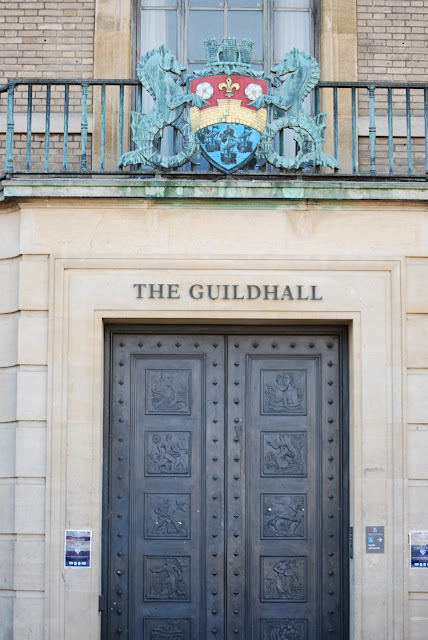 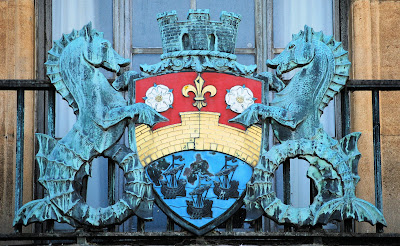 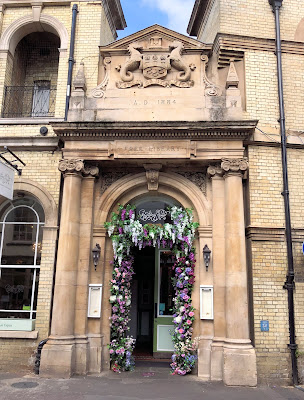 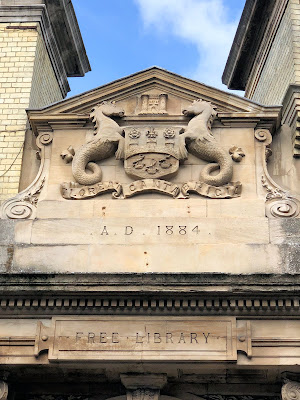 If you enlarge the image immediately above (or the one on the Guildhall) by clicking on it, and then compare that crest to that on the taxis or the historical plaque, you can see the differences between the old crest (which definitely looks like a castle) and the 1974 crest (which also looks a fair bit like a castle, but is a turreted bridge with two arches through which water can be seen, and which therefore plays more closely on the name of the city, Cambridge, or Bridge over the River Cam.
Posted by David B. Appleton at 2:00 AM