Well, Now, How Do I Go About Organizing These Arms!


I mean, really, there are several ways to do it, each and every one of which could be called the "correct" way, and each and every one of which is lacking in one way or another.
What am I talking about organizing? All of the roundels containing coats of arms on the façade of the train station in Cambridge, England. (For just a part of them, see the image directly below.) Because there are a lot of them. One source says there are 32; I only photographed 31, so either I missed one, or there is a duplicate on the façade. (Christ's College and St. John's College both use the same coat of arms, but may have been given separate roundels on the building.) 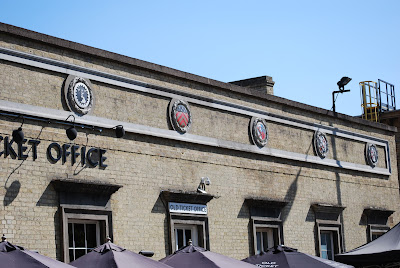 In any event, some sort of organization is needed, because even 31 coats of arms is a few too many for a single blog post. So in the end, rather that simply going from one end of the station to the other and organizing them from left to right (or from right to left, which is the order in which I took them), I'm going to start in the middle, with the arms of the City and of the University, flanking those of four individuals, "local dignitaries from when the station opened in 1845." All the rest of the arms are those of individual colleges at the University, and we will cover those in the next several posts.
So, to begin:
The City of Cambridge, on the left side of this series: 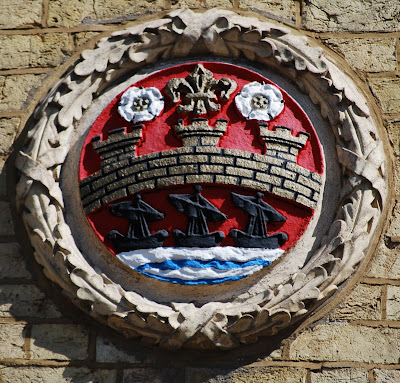 And the University of Cambridge on the right: 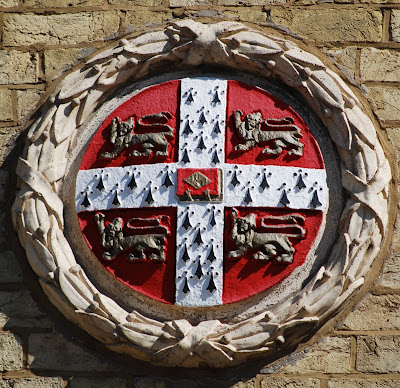 Then between the City and the University, going from left to right, we have:
The arms of Francis George Godolphin D'Arcy D'Arcy-Osborne, 7th Duke of Leeds (High Steward of Cambridge 1836-1850), Quarterly: 1 and 4, Quarterly ermine and azure a cross or (Osborne); 2 and 3, Gules a double-headed eagle displayed between in chief two fleurs-de-lis argent (Godolphin). 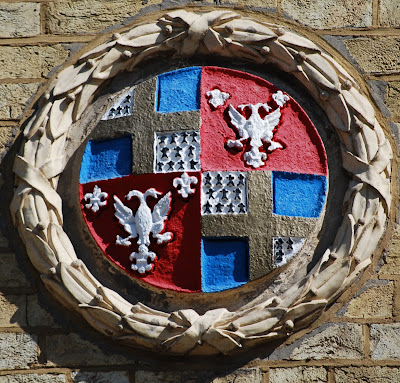 The arms of Admiral Charles Philip Yorke, 4th Earl of Hardwicke (Lord Lieutenant of Cambridgeshire 1834-1873), Argent on a saltire azure a bezant. 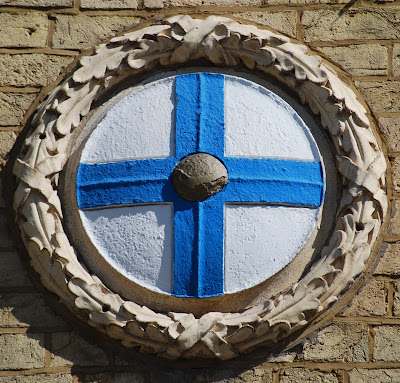 The arms of Hugh Percy, 3rd Duke of Northumberland (Chancellor of Cambridge University 1840-1847), Quarterly, 1 and 4: Grand-quarterly, i and iv, Or a lion rampant azure; ii and iii, Gules three lucies [they only show the heads of the fishes here, but I suppose they did what they could in the space available to them] haurient argent (Lucy); 3 and 3, Azure five fusils conjoined in fess argent [error: the fusils should be or] (Percy). 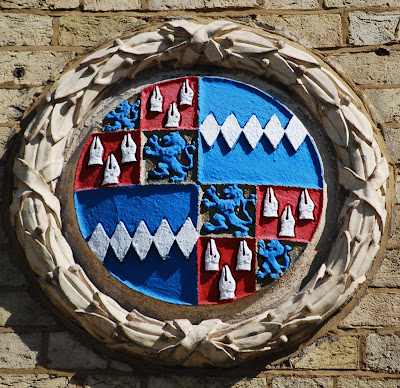 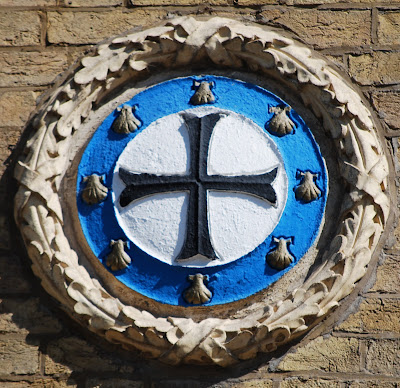 And there you have it! All of the non-College arms on the façade of the Cambridge train station.
Next time, College arms galore!
Posted by David B. Appleton at 2:00 AM