Continuing our long walk along the front of the railroad station in Cambridge, England, photographing the roundels with coats of arms in them, we come to the following:

Pembroke College, which bears the dimidiated* arms of de Valence and de St. Pol: Barry of ten argent and azure an orle of martlets gules (de Valence) dimidiating Gules three pallets vair on a chief or a label of five points azure (de St. Pol). These are the arms of the foundress, Mary de St. Pol, Countess of Pembroke. She was the daughter of Guy, Count of St. Pol, and the second wife of Aymer de Valence, Earl of Pembroke. 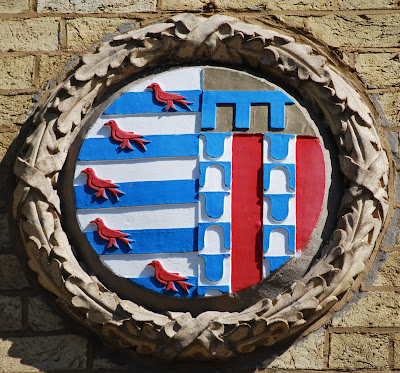 * Dimidiated: a formation of marshaling by joining the dexter half of one heraldic shield with the sinister half of another divided per pale.
Trinity Hall (not to be confused with Trinity College), founded in 1350, bears the differenced arms of it's founder, William Batemen, Bishop of Norwich. The grant of arms to the college in 1575 differences the Batemen arms by making the bordure as well as the crescent ermine. Batemen's arms had a bordure argent: 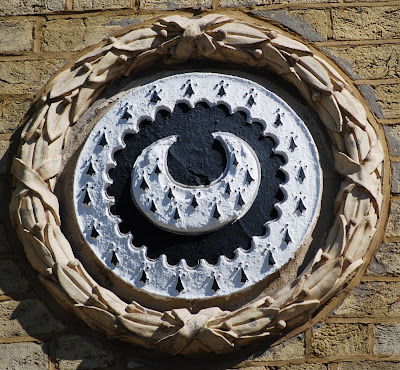 King's College, founded in 1441 by King Henry VI. King's College until 1448 used arms with two lilies and bishop's mitre and crozier, which the 1448 grant changed to three white roses: 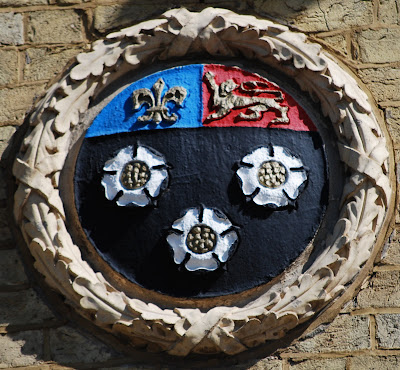 St. Catherine's College. Founded in 1473 by Robertd Woodlarke, Provost of King's College, the arms here are a clear reference to St. Catherine of Alexandria: 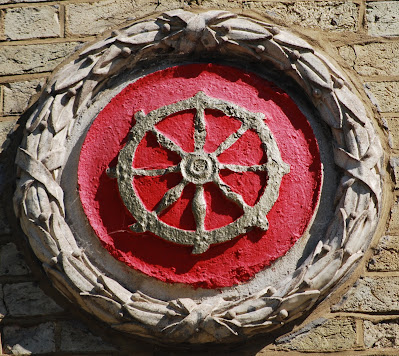 A two-fer -- Christ's College and St. John's College, which both use the same coat of arms, those of their foundress, Lady Margaret Beaufort, great-granddaughter of John of Gaunt and Catherine Swynford, and mother of King Henry VII. These are, of course, the Royal arms of England, Quarterly France ancient and England, differenced by a bordure compony argent and azure: 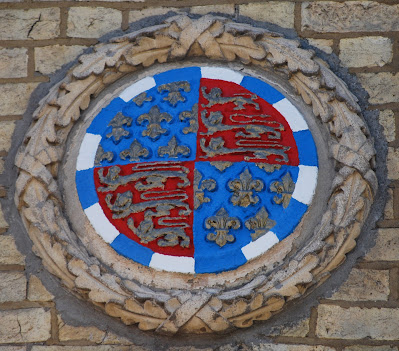 and Magdalene College. The College bears the arms of its founder, Thomas, Lord Audley of Walden, Quarterly per pale indented or and azure in the second and third quarters an eagle displayed or, overall on a bend azure a fret between two martlets or: 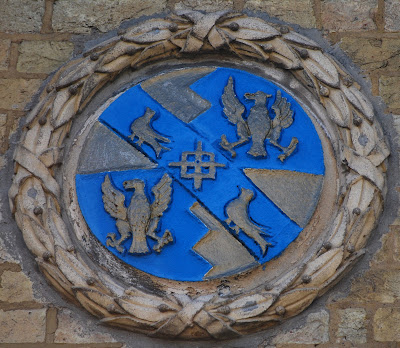 Next time, we finally make it to the other end of the train station, and the last of our armorial roundels.
Posted by David B. Appleton at 2:00 AM