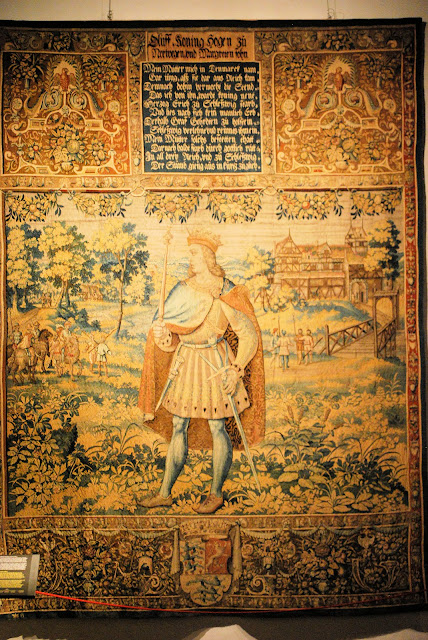 Oluf was the son of the Norwegian King Haakon VI and Margrete, the daughter of the Danish King Valdemar III. Oluf’s mother Margrete was also depicted in the series, but the tapestry dedicated to this extraordinarily powerful woman in Nordic history no longer exists. As a guardian for the young Oluf, Margrete succeeded in gaining power in Denmark as well as Norway. In the verses at the top of the tapestry, however, it is nowhere acknowledged that Oluf was a king by name only, and not by deed!

As a matter of fact, Oluf died before he had become of age, and soon Margrete was confronted by King Albrecht of Sweden who laid claim on her two kingdoms. Yet King Albrecht’s confrontation led to complete failure: he was defeated and forced to surrender his own kingdom to Margrete, who triumphantly united her three kingdoms in the Union of Kalmar (1397-1523). Formally, the union was governed by her young relative Erik IX of Pomerania, whose tapestry is still preserved in the Danish National Museum in Copenhagen. In reality, however, it was Margrete who pulled the strings. [Margrete here is the same Queen Margrethe I who died in 1412, and whose lavishly carved sarcophagus we have seen in Roskilde Cathedral in our post of December 13, 2021, at http://blog.appletonstudios.com/2021/12/the-sarcophagus-of-medieval-queen.html] 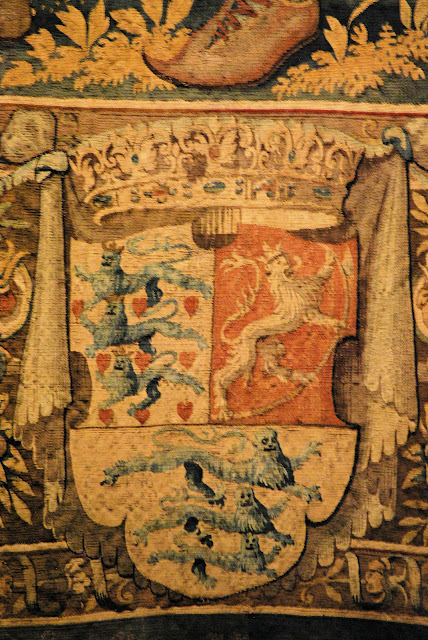 The king’s coat of arms carries the three lions of Denmark, the axe-bearing Norwegian lion, and the three “Baltic” lions. In reality, however, none of the Baltic regions were still governed by the Danish kings.
This post ends our trip to Kronborg Castle in Helsingør, and indeed to all of the heraldry that we have seen during our stay in Denmark. I hope that you have found at least some of these posts to have been of interest!
Posted by David B. Appleton at 2:00 AM