Upstairs in Kronborg Castle there is on display a series of tapestries commissioned by King Frederik II (reigned 1599-1598), who did so much to modernize and extend the Castle, depicting some of his predecessors. Each tapestry contains a block of text relating to the king portrayed.

I am going to review these tapestries in chronological order of their reigns as kings of Denmark. Much of the information given with each tapestry comes from the informational signs, in Danish and in English, accompanying each tapestry.
First is the tapestry depicting Knud VI (king 1182-1202): 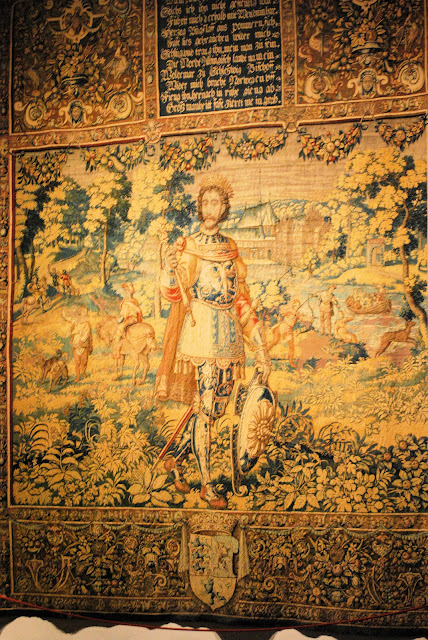 The king wears richly ornamented body armor and is armed with sword and shield. Furthermore, the king’s dignity is emphasized by the royal regalia: crown and scepter. His breastplate depicts the imperial eagle, referring to the king’s opposition to the German emperor, Frederik Barbarossa, who is mentioned in the accompanying verses. The Danish king was met with a demand to plead allegiance to the emperor, but this he ardently refused. On the contrary, he led his army into northern Germany, where he conquered several territories which were under the jurisdiction of the emperor.

In reality, the powerful Bishop Absalon played a major part in the Danish king’s victories. However, following the Lutheran reformation of the Danish church in 1536, the bishops of the realm had been stripped of their former political power. Frederik II, who was an orthodox Lutheran, probably felt not urge to have the political power of the late bishop Absalon spelled out in his tapestry series!

A large convent is seen behind the king: the now-demolished Groenendael south of Brussels. The motif is purely decorative and is derived from a tapestry designed by Berent van Orley. 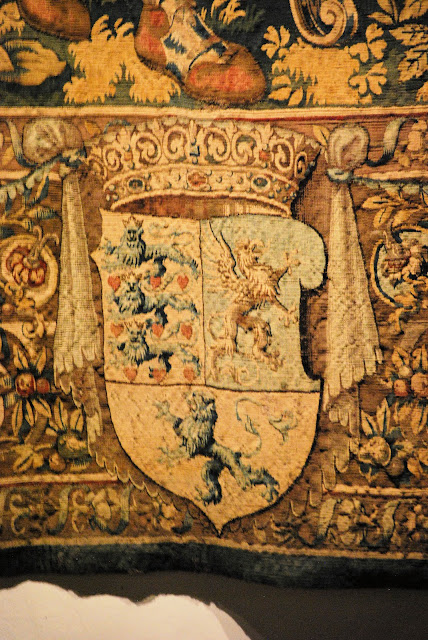 Apart from the three lions and nine hearts of Denmark, two further armorial bearings are displayed in the king’s coat of arms. The griffin refers to the land of the Wends, the standing lion to Northalbing, i.e., the land north of the river Elbe.