The next tapestry in this royal series is that depicting Christoffer II (king 1319-1332): 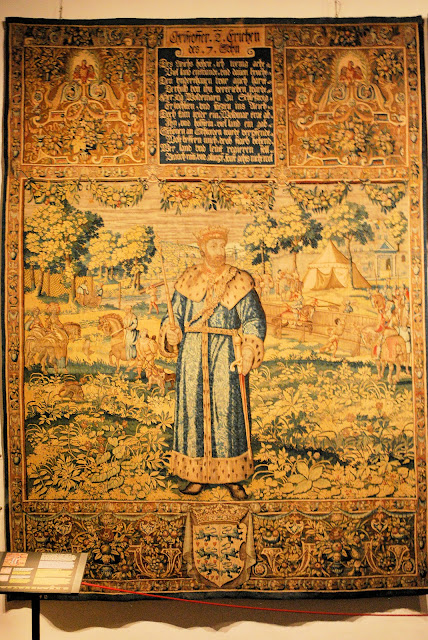 Accompanied by trumpeting horsemen, a knights’ tournament is held in the background to the right. To the left, a couple of workers are setting up enclosures prior to the noblemen’s hunt. Tournaments and hunts were privileged activities of the king and the nobility and as such, they are a much-favored motif in the tapestry series. In this particular instance, however, the jousting horsemen probably carry a second meaning, mockingly commenting precisely the king’s lack of jousting and warfare abilities.

The king’s inability is displayed in the accompanying monologue, which opens as follows: “for the kingdom’s dignity I little cared / much land gave away, with others shared / against my subjects I was also tough / so, from my throne they pushed me off”. Later Christoffer did in fact regain his throne, but this was accomplished only by buying foreign support and by pawning several territories. This approach entails the following conclusion: “He, who wants to rule people and land / needs advice and honor, or it all turns into sand.” 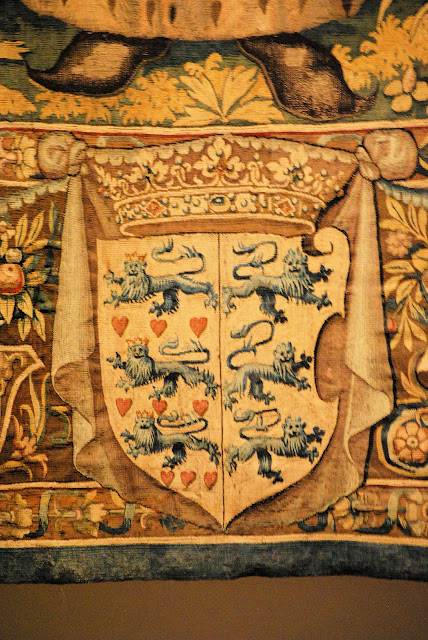 Only the three lions of Denmark and the three uncrowned “Baltic” lions are present in the king’s coat of arms. The armorial bearings that symbolize those territories, which his predecessor Erik VIII had conquered, have vanished once again.