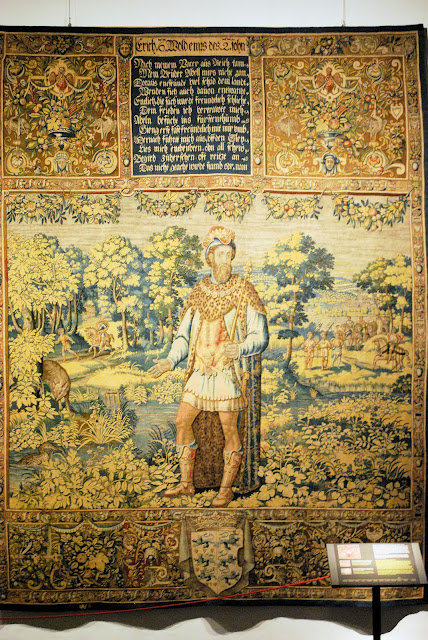 The king wears a crown on top of his hat and is dressed in a costume with no authentic historical reference – supposedly signifying that the king ruled “in distant times” (well, distant from the times of Frederik II, who commissioned these tapestries and ruled from 1559 to 1588). In his left hand he clutches his scepter while vividly gesticulating with his right hand. This significant gesture draws the viewer’s attention towards the animal life in the foreground on the king’s left side. A wolf lurks in the bushes, attentively watching a bittern which has caught an eel. The wolf, the incarnation of evil, sneaks up on its unsuspecting prey, while the bird grasping the slippery eel, the symbol of falsehood, quite possibly signifies that good shall overcome evil in the end.

Consequently, the wildlife of the foreground contains a hidden reference to the king’s ill-fated destiny. As a matter of fact, Erik was assassinated by his own brother, Abel, who much envied his crown. Abel, who is depicted on the next tapestry in line, did not live to regret his brother's murder, however, as he was killed on the battlefield only two years later. 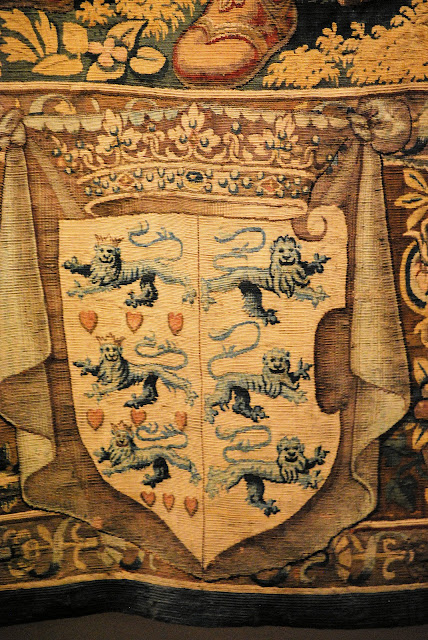 The king’s coat of arms carries the three lions of Denmark and three uncrowned lions that symbolize the Baltic territories of the Danish kings.