Late last week I ran across an article about some heraldry with a more or less local flavor.

I say "more or less" local, as Texas is a large state, and Dallas, where I live, and San Antonio, where the article is about, are 274 miles (441 km) apart, or as we generally think about it here, a four-and-a-quarter hour drive.

Still, even that many miles away is still well inside the boundaries of the State of Texas, and so more or less "local".
Anyway, there was an article published on March 16, 2022 in the San Antonio Express-News noting the fact that the city of San Antonio, and the county in which it is located, Bexar (pronounced "bare", like "bear") County, each have a Spanish coat of arms.
No, really! 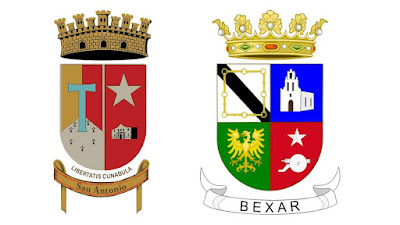 The arms were designed in 1971 by Thomas A. Wilson, a member of the Texas Hispanic American History Foundation, who then had them officially catalogued and filed in the heraldic archives of Spain. Wilson and Fernando Muñoz Altea of Madrid, the Spanish Chronicler King of Arms, presented them in San Antonio on December 18, 1971.
(I've known about the existence, though not all of the history, of the Bexar County arms for some time now; I even use it as an example of "local" coats of arms in some of my presentations about heraldry to genealogy groups and lineage societies here in Texas. And I've seen the San Antonio coat of arms before, but had no idea of its origins or history.)
Anyway, there's a lot more in the article including a bit of the history of the area, the history and elements of these two coats of arms, their uses today both here and overseas, and the fact that the official copy of San Antonio's coat of arms has been missing for 50 years.
To see all that, and more, you can read the article by Timothy Fanning of the San Antonio Express-News at https://www.expressnews.com/news/local/article/san-antonio-bexar-county-coat-of-arms-spain-17004390.php?fbclid=IwAR3vc41jvEPhhRh1gT56z8-P3AbYMUya9wmgZgMMiwk8BQuc19D9aK7oDLY