The next tapestry in order of his reign is that depicting Valdemar II “the Victorious” (king 1202-1241): 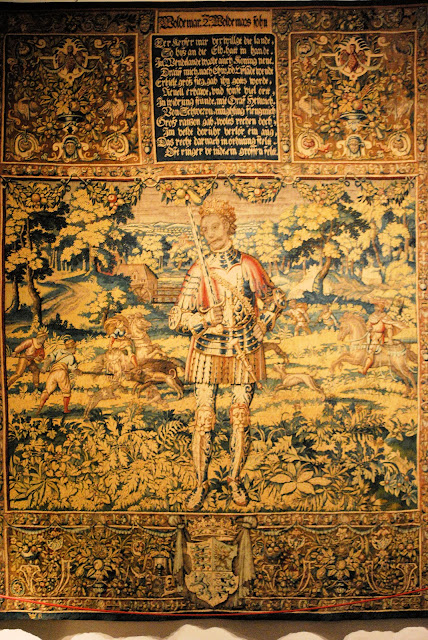 Clad in his shining armor, the king carries his crown, the most powerful symbol of royalty, and he brandishes his sword as if preparing for combat. In the accompanying German verses, a full account is given of the king’s many successful war campaigns which secured him the epithet “The Victorious”. The king’s many victorious battles, however, are nowhere accounted for in the background of the tapestry, where a hunting scene occupies the entire scenery.

As stated in the verses at the top of the tapestry, Valdemar II was also an accomplished legislator. In the final years of his reign, the first official code of the kingdom, Jyske Lov (the law of the province of Jutland), was written down. In fact, the oldest surviving transcript of this code is presently to be found in Sweden, to where it was taken as a spoil of war during the years of the Swedish occupation of Denmark (1658-60). On the same occasion, most of Kronborg’s priceless art treasures were also shipped to Sweden – including the table canopy of Frederik II that belonged to the series of king tapestries. 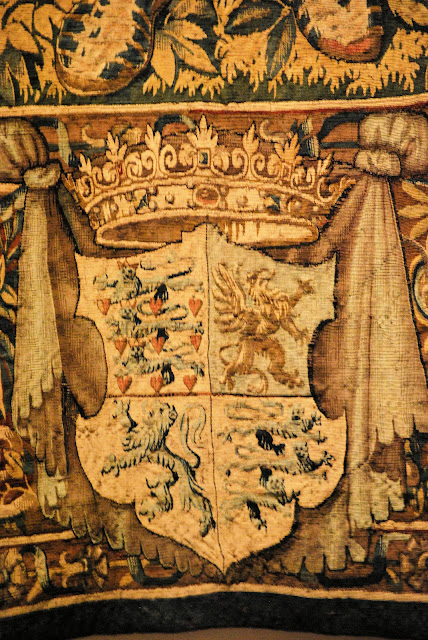 Compared to the coat of arms of Knud VI, yet another armorial bearing is here introduced: three uncrowned lions – a symbol of the Baltic territories that were conquered by Valdemar II, and which we'll be seeing more of in this series of armorial tapestries.