A quiet peasant scene and a group of hunters on foot or mounted on horses is seen in the background of the tapestry. This apparently idyllic setting sharply contrasts the ferocious acts spelled out in the accompanying verses: “For kingship I did crave / thus my brother I sent to the grave”. Consequently, the wildlife of the foreground carries a hidden symbolism, referring to Abel’s dreadful deed.

On the left side of the king, a falcon has put its claws on a small bird while a poisonous snake is quietly slipping away in the shrubbery underneath. Most likely, this scene is modelled on the classical theme of the “Eagle fighting the snake”, symbolizing the struggle between good and evil. Alas, in this instance evil – in the shape of the snake – slips away while the claws of the falcon grip the powerless bird. Due to higher justice, however, the evil king was himself killed in an uprising only two years after the ruthless assassination. The overturned helmet at his feet refers to his death on the battlefield. 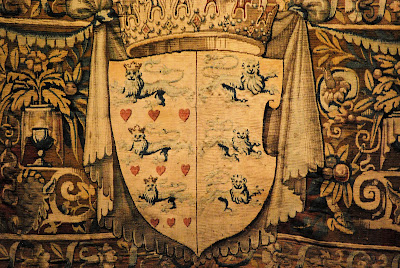 Abel carries the same armorial bearings as his predecessor, the brother he had assassinated: the three lions of Denmark and the uncrowned “Baltic” lions. During his short reign no further territories were conquered.