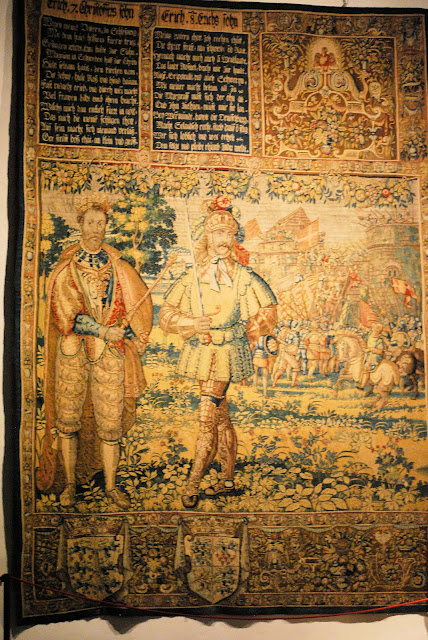 The destiny of Erik VII is intertwined with perhaps one of the most well-known murders in Danish history: the regicide in the barn at Finnerup. The brutal fate of Erik VII is scarcely mentioned in the accompanying monologue, stating that “my own struck me down”. In the verses at the top of the tapestry, however, it is openly acknowledged that the king’s violent end to a large extent was self-inflicted – he was notorious for stealing the church taxes and for misusing his royal power to seduce the noblewomen of the realm.

Notwithstanding the king’s flawed character, the murder of a king should not be tolerated. Accordingly, the monologue of his successor, Erik VIII, acknowledges this king for having revenged his father. Furthermore, Erik VIII is famous for the conquest of several territories in northern Germany. Appropriately, a besieged town is seen in the background of the tapestry. The defence is breached by spear-bearing infantry, who ascend the town walls using ladders. On top of the wall the red and white flag signify that the Danish king’s arms is about to win yet another battle.

Mounted on his rearing horse, the king calls out for combat and brandishes his marshal’s baton, the commander-in-chief’s mark of distinction. 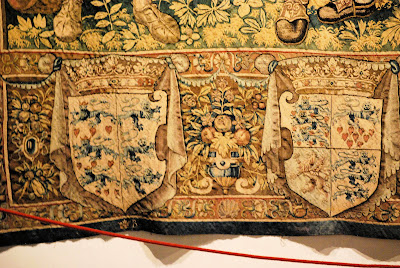 Erik VIII’s great success on the battlefield is accounted for in the king’s coat of arms, where yet a couple of armorial bearings are displayed in comparison with his predecessor’s coat of arms. The griffin at the bottom left symbolizes the land of the Wends, and the lion and hearts at the upper right symbolizes the land of the Goths, or Jutland.
Posted by David B. Appleton at 2:00 AM