A Memorial to a Hero


Our next armorial memorial is one to a General who as a young (age 26) lieutenant won the Victoria Cross for his actions in the Crimean War and other medals and honors (which are reproduced on his memorial, below) for his service. 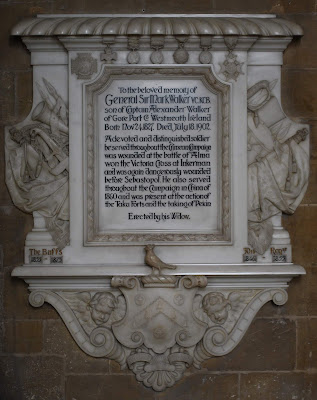 The text of the memorial reads:

A devoted and distinguished soldier
he served throughout the Crimean Campaign
was wounded at the battle of Alma
won the Victoria Cross at Inkerman
and was again dangerously wounded
before Sebastopol. He also served
throughout the Campaign in China of
1860 and was present at the action of
the Taku forts and the taking of Pekin.

Erected by his Widow.
(The "action of the Taku forts and the taking of Pekin" are events covered - well, from an American point of view, anyway - in the 1963 Charlton Heston movie, 55 Days at Peking.)

General Walker was born in Gore Port, Finea, County Westmeath in Ireland, the son of Captain Alexander Walker and Elizabeth Elliott. His younger brother was Sir Samuel Walker, 1st Baronet QC.  During the Crimean War, Walker was a 26-year-old lieutenant in the 30th Regiment of Foot (later the East Lancashire Regiment) of the British Army when the deed for which he was awarded the Victoria Cross was performed.

On November 5, 1854 at Inkerman, Crimea, Lieutenant Walker jumped over a wall in the face of two battalions of Russian infantry which were marching towards it. This act was to encourage the men, by example, to advance against such odds – which they did and succeeded in driving back both battalions.

He was wounded by a howitzer shell later during his service in the Crimea which resulted in the amputation of his right arm. He retired from the army with the rank of general in 1893, and was appointed a Knight Commander of the Order of the Bath. From 1900 until his death he was colonel of the Sherwood Foresters. 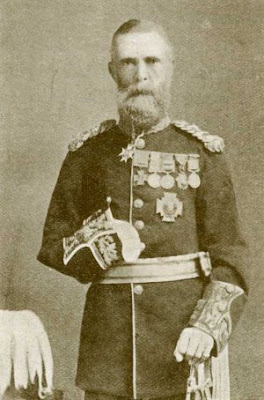 He died at Arlington, Devon, England on 18 July 1902, and is buried in Cheriton Road Cemetery in Folkestone, Kent. 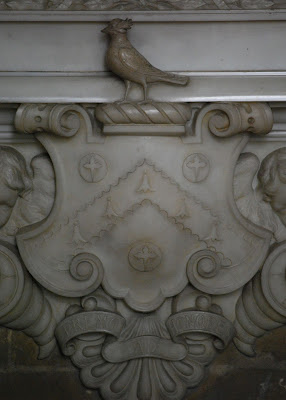 His arms are blazoned: Azure a chevron engrailed ermine between three plates each charged with a trefoil vert. Crest: A dove [close] bearing an olive branch in his beak. Motto (a most fitting one, I think): Premo ad honorem (Pursue/press on to honor).