Composers Get Armorial Memorials, Too!


Lest you think that it's just military men and former Archbishops who get all the armorial memorials in Canterbury Cathedral, we come now to one to an early 17th Century composer and organist. So there! 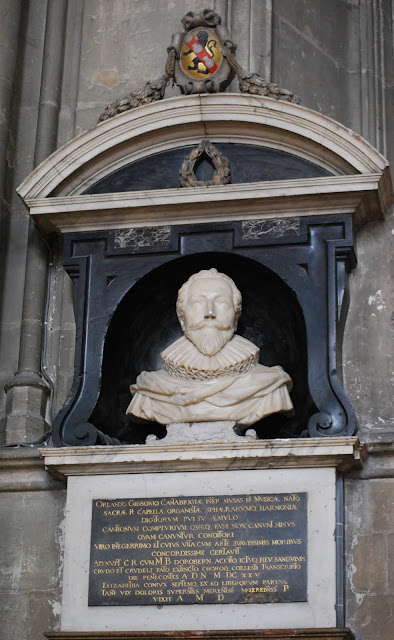 This is the memorial to Orlando Gibbons (1583-1625), an English composer, virginalist and organist of the Elizabethan and early Jacobean periods. Due to his sudden and early death (he was only 42 when he died), Gibbons' output was not as large as his older contemporary William Byrd's, but he still managed to produce various secular and sacred polyphonic vocal works, including consort songs, services, motets, more than 40 full anthems and verse anthems, a set of 20 madrigals as well as at least 20 keyboard works and various instrumental ensemble pieces including nearly 30 fantasies for viols. He is well known for the 5-part verse anthem This Is the Record of John, the 8-part full anthem O Clap Your Hands Together, two settings of Evensong and what is often thought to be the best known English madrigal: The Silver Swan. He is considered the leading composer in early 17th century England and a pivotal transition figure from the end of the Renaissance to the beginning of the Baroque era.

More about his life, works, and death from a cerebral aneurysm can be found in his Wikipedia article at https://en.wikipedia.org/wiki/Orlando_Gibbons

The text of the memorial plaque below his bust is, as is so common for the time, entirely in Latin. (No, I'm not translating this one for you. Sorry! Not sorry.) 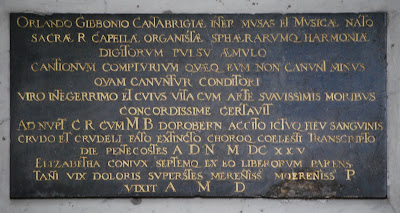 His coat of arms is carved and painted at the very top of the memorial. 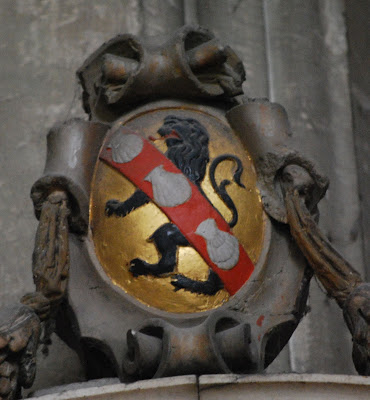 This coat is blazoned Or a lion rampant sable overall on a bend gules three escallops argent.