But What Happened to the Coat of Arms?

The next memorial on our tour is one to John Turner, S.T.P. vicar of Greenwich, who was installed in the twelfth Prebend in June 1717; he was a prebendary likewise of the church of Lincoln. He died in December, 1720, and was buried in Canterbury Cathedral in the north isle of the nave, where there is this monument erected to his memory, with an inscription in Latin: 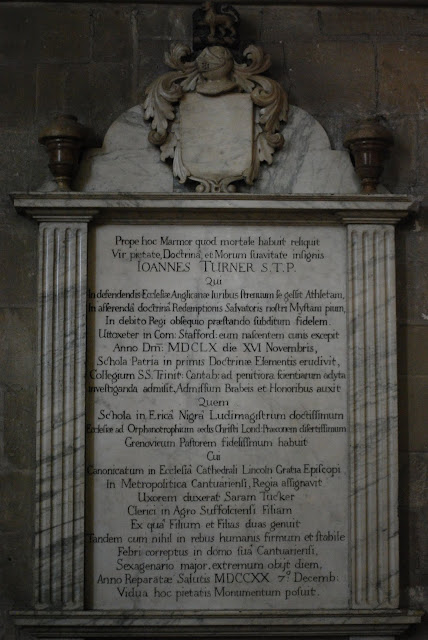 A translation of the Latin text reads:

Near this marble rests all that is mortal of John Turner, D.D. a man for piety, learning, and sweetness of manner remarkable; an indefatigable assertor of the Rights of the Church of England, the Doctrine of the Redemption of our Blessed Savior; a faithful subject and truly loyal to his Prince; to whom Utoxeter, in the County of Stafford gave birth, Nov. 16, 1660, whom a country school instructed in the first Rudiments of Learning; and Trinity College, Cambridge, admitting him to the inmost recesses of science, adorned him with Rewards and Honors. He was the learned Master of a School at Blackheath, an eloquent Preacher at Christ Church, London, and a faithful Pastor at Greenwich. By favor of the Bishop of Lincoln he was Canon of Lincoln; and, by the King’s favor, of this Metropolitan Church of Canterbury. He married Sarah Tucker, a Clergyman’s daughter in Suffolk, who bore him one son and two daughters. At length, nothing here being firm and stable, he died of a fever in his house at Canterbury, the 7th of December, 1720, aged 61 years. His Widow, in pious regard, erected this Monument. 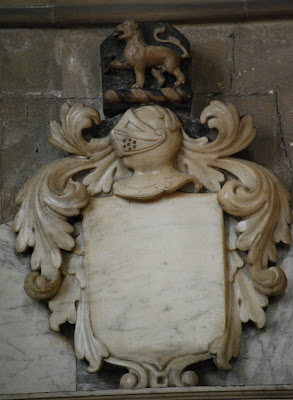 Despite the statement in the list of Canons or Prebendaries of Canterbury Cathedral (https://www.british-history.ac.uk/survey-kent/vol12/pp55-108) that “[a]t top are the arms of Turner, impaling Tucker and quarterings”, there are now as you can see no arms remaining on shield; only a crest atop the helmet. A lion passant or.