The next stop on our heraldic tour of Canterbury Cathedral is the Hales Memorial.

The descriptive sign on the wall next to the Memorial states:

The inscription refers to JAMES HALES,
Treasurer to the Portuguese Expedition of 1589,
who died of fever and was buried at sea;
to his widow, DAME ALICE, who died in 1592;
to CHEYNEY HALES, their son, who died in 1596;
and to RICHARD LEE, Alice's widower,
who erected the monument. 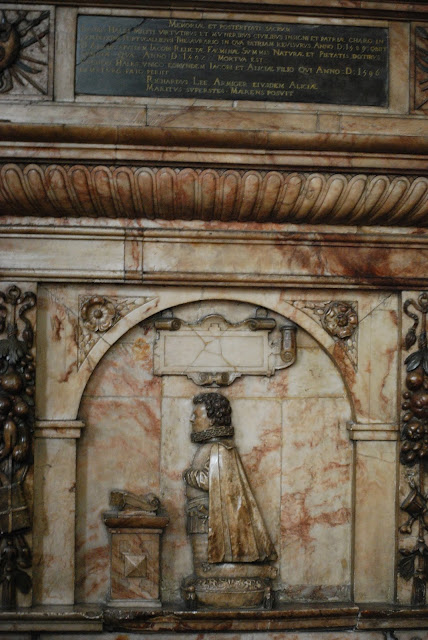 A translation of the Latin inscription above the carved bas-relief of James Hales reads:

Sacred to Posterity. To the memory of Sir James Hales, Knt. Renowned for military Achievements and public Employments, and dear to his country, who being appointed Treasurer in the expedition to Portugal, returning from thence to his native country, died in the year 1589.

To Alice, his relict, a Woman adorned with all the gifts of Nature and Piety, who died in 1592.

Cheney Hales, only son of the above-mentioned James and Alice, who died 1596, snatched away by an untimely death.

Richard Lee, armiger, the surviving and sorrowful husband of the said Alice, has erected this monument.

Sir James Hales (d.1589) of The Dungeon in the parish of St. Mary Bredin, Canterbury, Kent, was a soldier who served as treasurer of the 1589 expedition to Portugal, a reprisal for the attack by the Spanish Armada on the English fleet the year before. He died as the expedition was about to return home to England and was buried at sea by his fully armed body being dropped feet first over the side of his ship.

Alice later married Richard Lee, who erected this monument to his wife, to her first husband, and to Cheney Hales.

The Hales arms appear in a couple of different places on the monument: 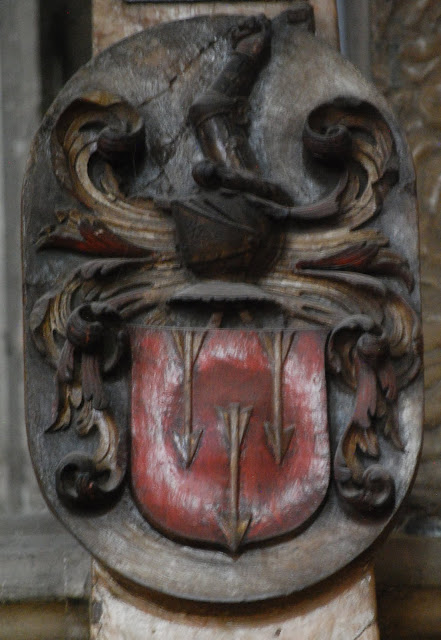 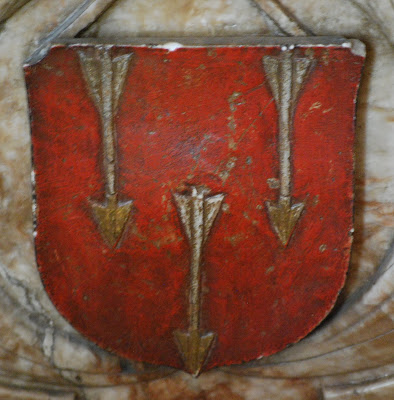 The Lee arms, marshaled with those of Alice Kempe Hales Lee, also appear on the monument. 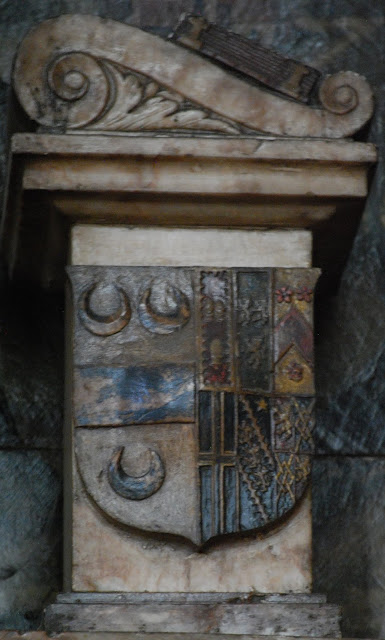 These arms are blazoned: Argent a fess between three crescents sable (Lee), impaled by Quarterly of six; 1, Gules three sheaves within a bordure engrailed or (Kemp); 2, Azure three lions rampant within a bordure or (Chickles?); 3, Or a chevron between three cinquefoils gules (Chichele); 4, Sable a cross voided or (Apulderfield); 5, Sable three lions passant between two bendlets engrailed argent(?) a mullet in sinister chief for difference (Browne?); and 6, Quarterly: i and iv, Gules a lion rampant or (?); ii and iii, Sable a fret or in the center a crescent gules for difference (Maltravers).

We have seen a different version of the Chicheley arms before, in the arms of Henry Chicheley, Archbishop of Canterbury 1414-1443, Argent a chevron between three cinquefoils gules.