In Memory of a Young Captain


Moving along in Canterbury Cathedral from St. Michael's Chapel, we came to this memorial to a young man (only 30 years old) who died in Northern Nigeria in 1904. 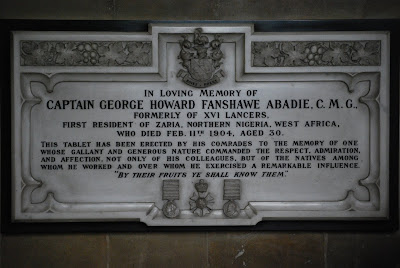 The text on the memorial reads:


In Loving Memory of
CAPTAIN GEORGE HOWARD FANSHAWE ABADIE, C.M.G.,
Formerly of XVI Lancers,
First resident of Azira, Northern Nigeria, West Africa,
who died Feb. 11th 1904, aged 30.
This tablet has been erected by his comrades to the memory of one
whose gallant and generous nature commanded the respect, admiration,
and affection, not only of his colleagues, but of the natives among
whom he worked and over whom he exercised a remarkable influence.
“By their fruits ye shall know them.”

Captain Abadie died in Kano, Northern Nigeria, at the age of 30 of a malignant fever. He is interred in the European Cemetery there. 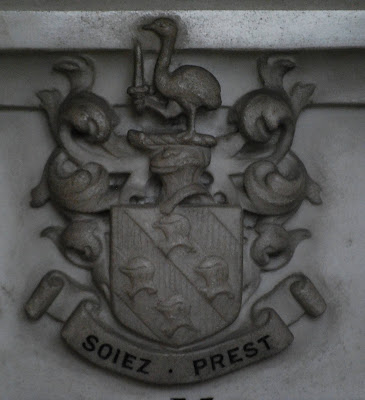 The arms, uncolored here, are blazoned: Bendy of six argent and gules four helmets in cross [tincture]. The crest is: An ostrich holding a sword erect in its dexter foot. The motto is Soiez prest. (This may be a misspelling of Soyez prêts, Be prepared.)