In our review of some of the heraldic monuments and memorials in Canterbury Cathedral, we next come to this very impressive one of Sir John Boys, who died in 1612. (Not to be confused with Dean John Boys who is buried in the Dean's Chapel, nor with Sir John Boys (1607-1664.) 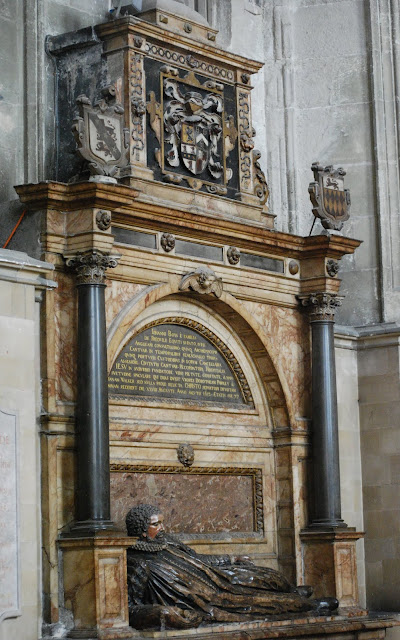 This Sir John Boys was the Royalist Governor of Donnington Castle in Berkshire during the English Civil War, who served at various times as Canterbury MP, judge in the Chancery Court of the Cinque Ports, Recorder of Canterbury, and steward to five Archbishops. He also founded Jesus Hospital almshouses which still operate on the Sturry Road. 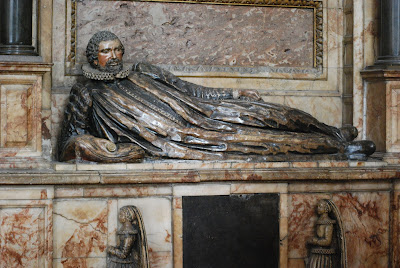 Sir John m. (1) Dorothy, daughter of Thomas Pawley of London, merchant; and (2) by 1599, Jane (d. 12 Feb. 1634), daughter and coheir of Thomas Walker, leatherseller, of London, widow of Daniel Bende of London. Both of his wives are depicted kneeling below his reclining figure (above) on the face of the monument, above. 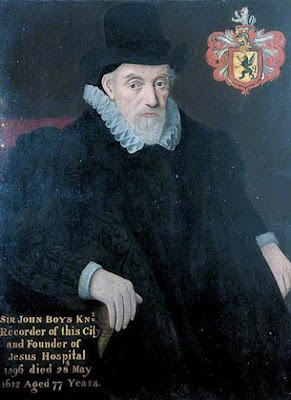 A more complete biography containing the offices he held and his activities can be found on-line at https://www.historyofparliamentonline.org/volume/1604-1629/member/boys-john-1535-1612 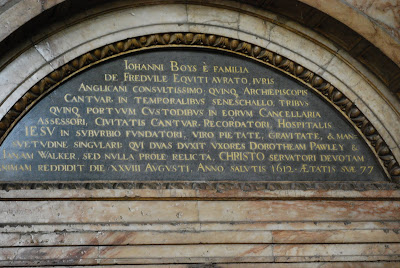 A translation of the Latin inscription on the face of the monument reads:

To Sir John Boys, of the family of Fredvile, Knight, a learned Lawyer; Steward of the temporalities to five Archbishops of Canterbury; Assessor in this Court to three Wardens of the Cinque Ports, Recorder of the City of Canterbury; founder of Jesus Hospital in the Suburbs; a man of singular piety, gravity and mildness: He married two Wives, Dorothy Pawley, and Jane Walker, but leaving no child, he restored his devoted Soul to Christ his Saviour, August 28, 1672, aged 77.

Sir John's arms are placed at the top of the monument, flanked on either side by the arms of his first wife (to dexter, the viewer's left) Dorothy Pawley, and his second wife (to sinister, the viewer's right) Jane Walker. 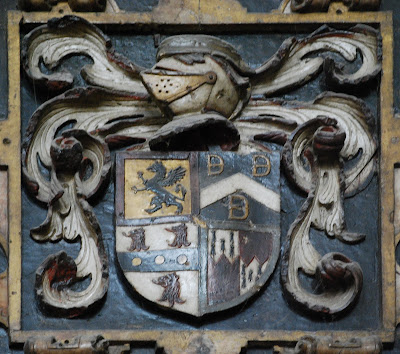 Quarterly: 1, Or a griffin sergeant sable within a bordure gules (Boys); 2, Sable a chevron argent between three buckles or (Phalop); 3, Argent on a fess sable between three lion’s heads erased gules three bezants (Ringley); and 4, Quarterly per fess indented ermine and gules a bordure azure (Langley). 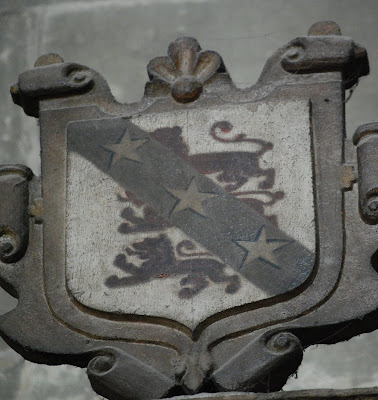 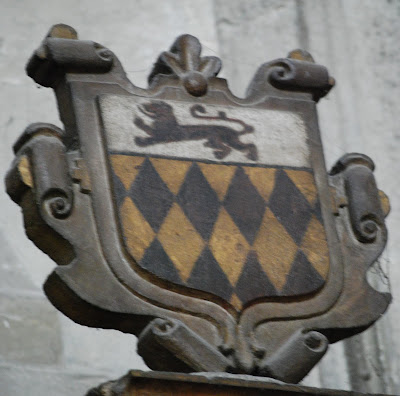 Walker: Lozengy or and gules on a chief argent a lion passant gules.

I have to admit, I found myself suitably impressed by this monument.