You Just Never Know Where You Might See Heraldry


So my wife and I went to a small antiques show/fair a couple of weeks ago, mostly because a friend of hers had a booth there, as well as because you never know, we might find something that we just can't live without.

It shouldn't have been surprising, because as I've said many times before, "you can find heraldry everywhere!", but there we were, and there it was -- heraldry! 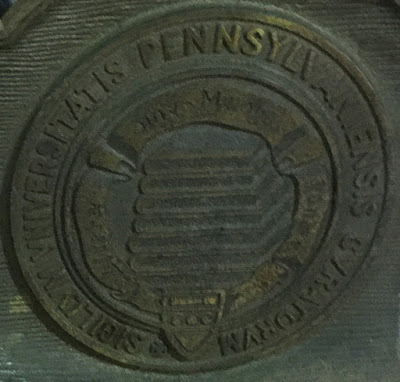 In this specific instance, one dealer had a pair of cast metal bookends (I'm not showing you the whole picture, as he requested that I not upload the pictures I took of them to the internet, and I promised that I wouldn't, so you're just seeing the details here) with the seal of the University of Pennsylvania on them.

At the base of the seal on each of the bookends was the arms of the original Proprietor of Pennsylvania, William Penn, Argent on a fess sable three plates. 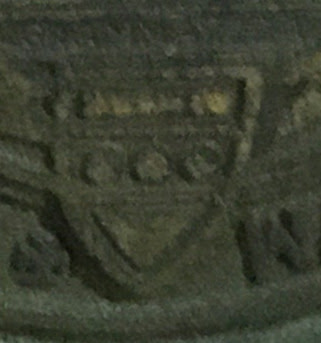 Yes, the bookends are heraldic; no, I didn't buy them. (The price was a little steep for my current budget, I have no personal relationship to the University, and I'd have to try to find a place in the house to put them. Plus, for some reason I no longer feel the need to buy every item I see that has heraldry on it. So, yeah, I took a couple of photographs of them and then left them there.)

The coat of arms on the bookends is not the one that the University currently uses, though as you can see from the image below, the arms they use are clearly related to/based on Penn's arms (with elements from Benjamin Franklin's arms on the chief).

All in all, a fun little bit of heraldic serendipity as part of a pleasant morning getting out of the house with my wife!