I had high hopes for this one, I really did. And (initially) for nought, apparently.

We were still walking about the exterior of Abercorn Church in Abercorn, Scotland, and ran across the following carved coat of arms and crest. 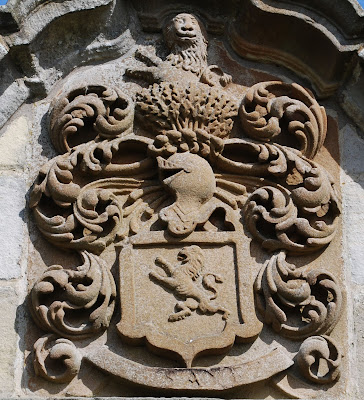 You can see why I had to photograph it. It's a beautiful work of carving, with a very dynamic rampant lion on the shield, and I just love the face and mane of the demi-lion in the crest. Not to mention the very exuberant mantling around both the crest and shield. (You can click on the image above to see the larger image with more detail.)

The crest I cannot find anywhere. One would think that a demi-lion gardant issuant from a hurst of oak trees/oak bush, however differently it might be blazoned, wouldn't be that hard to track down. One would be incorrect.

I had thought that the motto scroll below the shield might be helpful. It is badly worn, but it is easy to make out the letters S A Y E possibly followed by a Z, which might then be interpreted, assuming that the first two letters, hypothetically E and S, would make the same motto as the family in my last post, Dundas of Duddingston, who used Essayez (Try).

And, indeed, I found a couple of other Dundas families - Dundas of Dundas, and Dundas of Arniston - who use a crest of which the one carved here might be a mistake for: A lion's head affronty looking through a bush of oak proper. Both of these branches of the Dundas family used the motto Essayez.

So in the end, I think maybe we've solved it. (Something that none of the websites about Abercorn Church were able to do; they spend much more time on a bit of the interior heraldry, which I'll get to in another post, because it really is pretty impressive.) I'm going to commit myself at this point and identify these arms and crest as those of Dundas of Arniston. It was a bit of a long row to hoe, but we finally made it.

And isn't that lion (and the mantling) worth that trip?