We're Not Sitting With the Hoi-Polloi


For our last look at the heraldry contained in the church at Abercorn, Scotland, I have saved the best, or at least the largest and most "in your face," for last.

I am speaking, of course, of the Hopetoun Loft, a separate enclosure with its own private entrance built behind and above the altar by the Earl of Hopetoun.

This is the view from the floor of the church, looking up into the Hopetoun Loft. (You really need to click on the image above to get the full effect from the larger image.) 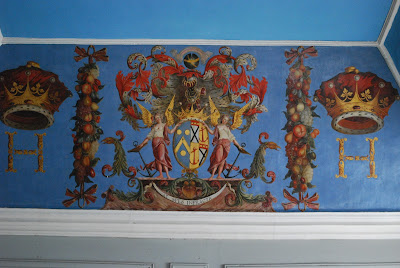 Here's a closer view, with the achievement of arms sandwiched in between the two pillars of fruit, between two copies of the letter H surmounted by a very large earl's coronet.

If you are going to "mark your territory" heraldically, by golly, this is how you do it! Just sayin'.

The foliate framing around the upper edge of the front of the Loft has two copies of the arms, one facing the church (top) and the other facing the Loft (bottom), each surmounted by an earl's coronet and supported by, well, I'm not sure what they are. At first blush I thought that they are mermen or mermaids, but closer inspection shows no fish tails, only a continuation of the green foliage. In any event, they are not the supporters found in the full achievement painted on the back wall of the Hopetoun Loft. 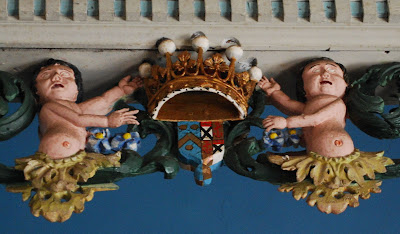 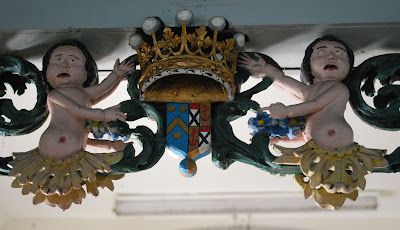 But, of course, it is that large achievement of arms painted on the back wall that really catches the eye. 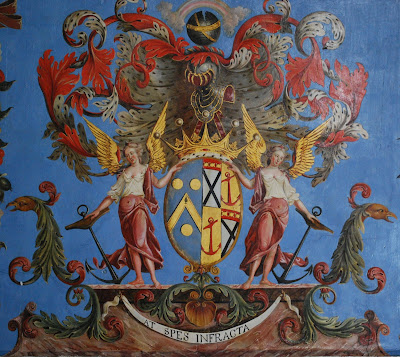 It is the marital arms of Charles Hope, the 1st Earl of Hopetoun, on the dexter (left side of the viewer) side, and his wife, Lady Henrietta Johnstone, daughter of William Johnstone, the 1st Marquess of Annandale, on the sinister side. The Hope and the Johnstone/Johnston families, both coming from the same area and moving in the same social circles, intermarried over the course of several generations, some generations becoming Hope-Johnston and other Hopes taking Johnstone as a middle name.

The Hope of Hopetoun arms are blazoned Azure on a chevron or between three bezants a bay leaf slipped vert. The Johnstone of Annandale arms are blazoned Quarterly: 1 and 4, Argent a saltire sable on a chief gules three cushions or (Johnston); 2 and 3, Or an anchor gules (Fairholm of Craigiehall). The shield is surmounted by the coronet of an earl. The crest is the same we have seen in the Hope of Craighall window a few posts ago: A globe fracted at the top under a rainbow with clouds at each end all proper. The supporters are: Two female figures in loose garments hair dishevelled each holding in the exterior hand an anchor all proper. (Again, the anchor is an emblem of hope, and thus cants on the surname.) The motto is At spes infracta (But hope is undaunted), also playing on the surname.

All in all, the Hopetoun Loft is a magnificent display of heraldry, and as I said above, if you are going to "mark your territory" heraldically, this is how you do it! (Though I do wonder how the regular members of the parish felt about being literally "looked down upon" by Lord and Lady Hopetoun and their family during services there.)