Another (Even Older) Monument to A Dalyell of the Binns


Back in that corner of the church at Abercorn, Scotland, was another monument to another member of the Dalyell of the Binns family. 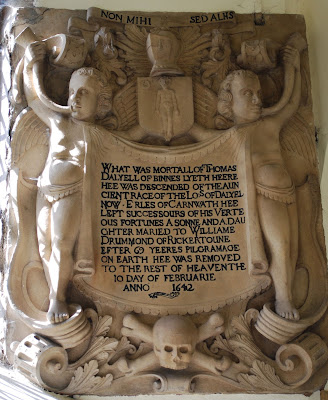 What was mortall of Thomas Dalyell of Binnes lyeth heere. Hee was descended of the auncient race of the Lo[rd]s of Dalyel now Erles of Carnwath. He left successours of his verteous fortunes, a sonne and a daughter maried to William Drummond of Rickertoune. Efter 69 yeeres pilgramage on earth hee was removed to the rest of heaven the 10 day of Februarie Anno 1642


The angels on each side of the banner with the legend appear to be blowing shofars, or ram's horns.

But of course, it's the heraldry on top that held the bulk of my attention. 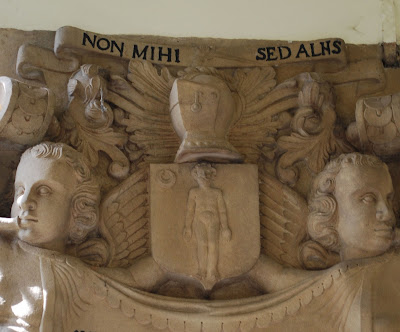 The arms are those of the oldest of Dalyell of the Binns, Sable a naked man arms extended proper, in dexter chief a crescent for difference. (A crescent is often seen as the heraldic difference for a second son.) The crest is slightly different from the Dalyells we have seen, being: In dexter hand a sword proper, instead of a scimitar. The motto above the crest, too, is different: Non mihi sed alns (Not for myself, but for the high [God?]), instead of I dare.

It is possible that the crest is a transitional one; the crest of the Dalziel Earls of Carnwath is A dagger erect proper (without being held by a hand).

This memorial is a beautiful piece of carving; the helmet and mantling is especially well done and striking, as is the hair of the angels, and it was a pleasure to be able to see it.