Continuing our heraldic tour of Abercorn Church in Scotland, we found two memorial plaques to different members of a family, both of whom had military service, one of whom had been an officer of arms in the Court of the Lord Lyon.

One of these plaques was in memory of Sir James Bruce Wilkie Dalyell of the Binns, 9th Baronet, and of his wife, Dame Mary Marjoribanks Robertson. 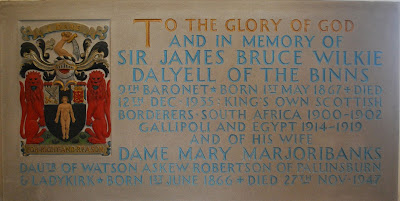 The arms are those of Dalyell of the Binns blazoned above, with a second, sinister canton bearing the badge of a Baronet of Nova Scotia. 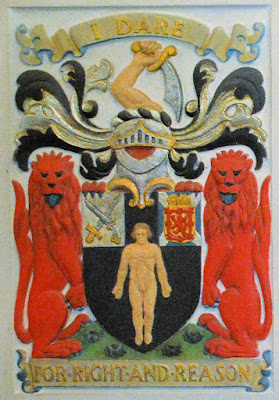 The crest is A naked arm embowed brandishing a scimitar both proper, with a motto (above the crest) is I dare with a second motto below the compartment (which is a vert mound scattered with thistles proper), For right and reason. The supporters are two lions rampant [or are they really sejant erect?] gardant gules armed and langued azure.

The second memorial plaque is for Gordon Dalyell of the Binns, once Unicorn Pursuivant of Arms in the Court of the Lord Lyon. 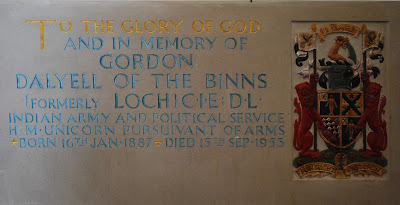 His arms are: Quarterly: 1 and 4, Sable a naked man his arms extended proper on a canton argent a sword and pistol in saltire proper; 2, Or a saltire engrailed sable between two swans naiant in fess undy or in a loch proper, in chief a mullet gules for difference (Loch of Drylaw); 3, Or a bend checky sable and argent between three buckles azure (Dalziel of Binns).

(And this, children, is why you should never place charges that don't contrast with the field on which they are placed. I had to enlarge the picture below a lot before I noticed the swans! Click on the picture below to see the larger image where they are slightly more noticeable.) 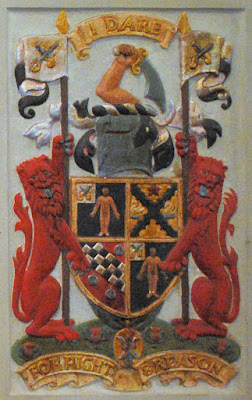 The crest is the same as for Sir James, above, as well as the mottos and compartment. The supporters, however, are each bearing a banner of the Dalyell canton. The pendent ribbon and medal of St. Andrew holding his cross are, I assume, for his service to the Crown in the political service and/or as Unicorn Pursuivant (1939-1953).

Next time, another monument to another Dalyell.