Heraldic Memorial to Another Dalyell of the Binns and His Family


Deeper into the less traveled portions of the Abercorn Church, we found this beautifully carved heraldic memorial. 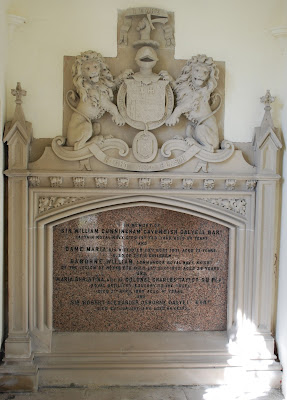 As you can see, it's carved in deep relief, and is placed there in memory of Sir William Cunningham Cavendish Dalyell, Baronet; his wife, Maria Sampayo (sister of the French minister at Hesse, Anthony Sampayo); their son, Osborne William Dalyell (who predeceased his parents); their daughter, Maria Christina (Dalyell) Taylor; and their other son, Sir Robert Alexander Osborne Dalyell, Baronet.

Sir William was the 7th Baronet, succeeding his older brother. Sir Robert was the 8th Baronet. He died unmarried, and the baronetcy became dormant until 1914.

Sir William Cunningham Cavendish Dalyell has his own entry on Wikipedia, and you can learn about his naval career and the actions in which he took part during the Napoleonic Wars at https://en.wikipedia.org/wiki/William_Cunningham_Dalyell.

But, of course, it's the heraldry that is the reason we're discussing this memorial here. 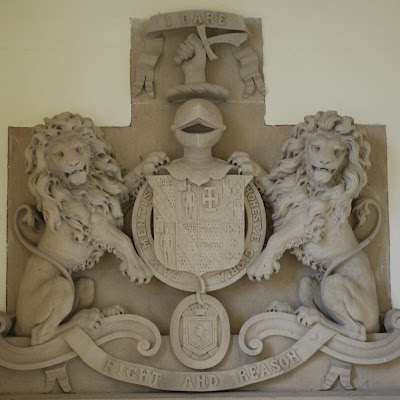 The arm in the crest of the Dalyells of the Binns we looked at in the last post has now become simply A hand holding a scimitar both proper. The motto above the crest is still I dare, but the motto below the shield has lost a word, becoming Right and reason instead of For right and reason. The supporters are more unambiguously Two lions sejant erect (gules armed and langued azure).

The badge of a baronet of Nova Scotia depends from a circlet (it is not a belt or garter) bearing the legend Fax mentis honestæ gloria (Honest fame is the torch of the mind).

The shield is a beautiful work of carving; much of it is even hatched. It consists of the arms of Sir William impaling those of his wife, Maria Sampayo. The blazon for these arms comes from the Lyon Ordinary and my translation of the French blazon found for these arms in Rietstap's  Armorial Général:

Quarterly: 1 and 4, Or a bend checky sable and argent between three buckles azure (Dalziel of Binns); 2 and 3, Sable a naked man arms extended proper on a canton argent a sword and pistol in saltire proper (Dalziel of Binns); impaling, Quarterly: 1, Azure a cross potent or; 2, Quarterly: i and iv, Or an eagle displayed gules; ii and iii, Checky or and azure; all within a bordure gules charged with eight letters S or; 3, Or six crescents pendant two two and two azure; 4, Azure five fleurs-de-lis two one and two or.

My take on all this: It's a beautiful memorial to a family with an interesting history. And it includes some great heraldry.