Moving now from the heraldry on the exterior of the church at Abercorn, Scotland, we went inside to find, among other heraldic displays, this large armorial stained glass window.

It's a beautiful window, of Christ holding a lantern and knocking at a door ("I stand at the door and knock. If anyone hears my voice and opens the door, I will come in and eat with that person, and they with me." Rev. 3:20)

Of course, the part of the window that most attracted me was the achievement of arms at the bottom. 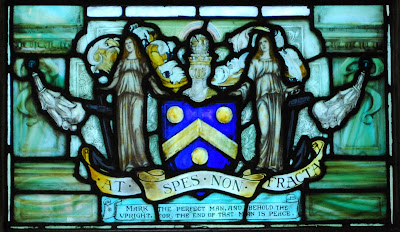 For such simple arms, the crest (which is unusual in that it has a torse sitting atop a crest coronet; normally the crest coronet is used in place of the wreath) is a fairly complex one. You can click on the image above to go see the full-size picture, which shows the details of the crest more clearly.

It is the arms of Hope of Craighall (first matriculation 1672-7; second matriculation 1780): Azure a chevron or between three bezants. The crest is A broken globe surmounted of a rainbow with clouds at each end proper. The supporters are Two females vested vert winged or on their heads garlands of roses proper each sustaining in her exterior hand an anchor azure. The motto is At spes non fracta (But hope is not lost).

The anchors are a common symbol of hope, and the motto, of course, also plays on the surname.

The Hopes of Craighall have been Baronets of Nova Scotia since Thomas Hope was created baronet on February 19, 1628. They also use the motto At spec infracta (But hope is undaunted).