There was an auction on Saturday, November 18, of a bunch of movie props, artifacts, jewelry, and so on created by Joseff of Hollywood. I had gone and signed up to submit a proxy bid on one particular item: 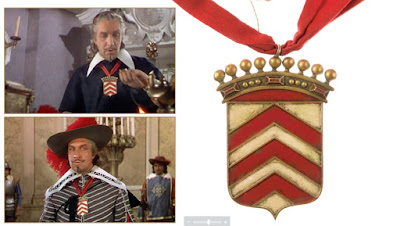 I was especially interested in it because of a confluence of three factors: heraldry, movie history, and genealogy.

First, it's not only heraldry, but it is historically correct heraldry used in a movie. The medallion is the arms of Cardinal Armand Jean du Plessis, Duke of Richelieu and Fronsac, Argent three chevronels gules. (The coronet of sitting atop the shield is not accurate, being the coronet of a French count, not a duke. Still, they used the correct coat of arms in the movie!) So there's that.

Second, it's from an old movie, and more specifically, an old costume drama, and people who know me well know that I have an interest in such movies. Indeed, I have a regular monthly movie review, mostly of movies set before the 17th Century (which "definition" has been expanded to include, for example, the various incarnations and remakes of The Three Musketeers) and in pre-technological fantasy worlds (such as The Lord of the Rings, among others). You can find a new movie review each month on my website at http://www.appletonstudios.com/movies2.htm. So there's that.

And, finally, there is a familial link, in that it turns out that Vincent Price is my sixth cousin, twice removed. (Don't tell my children about this connection yet. I've written about our family connection to Mr. Price in their Christmas present for this year, Appleton Family Stories 2017. So, shhhh!)

So, naturally enough, with all three of these factors connecting to this one object, I was very interested in acquiring it if I could. I carefully considered my options, looked at what the auction house estimate was, reviewed my budget, and submitted a bid for a little over the high estimate.

Alas, I was informed by email on Saturday that I had been outbid for this medallion. Am I disappointed? Well, yeah, of course. I mean, I have a personal interest and familial connections to this medallion. Am I really upset to have lost out on it? No, because I had submitted the bid that I thought my budget would bear, and I wasn't going to pay so much that I would worry about next week's or next month's groceries. I can only hope that whoever won the bidding on it will put in somewhere in pride of place in his or her collection. I know that I would have.