A Monument for a Wife


In another part of the church at Abercorn, in a narrow alcove where I could not get directly in front of it - hence the angle of the photographs here - was a monument to the memory of the wife of the man memorialized in my last post, Thomas Dalyell of the Binns: Janet, daughter of Edward Bruce, 1st Lord Kinloss. 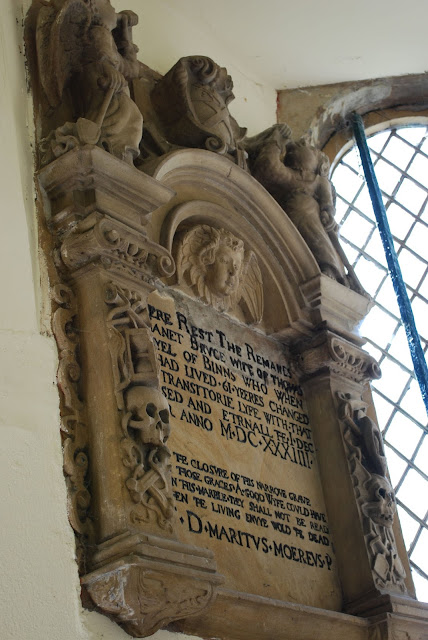 The inscription reads, to the extent I can make it out from this angle, as follows (I have placed what I believe are the missing letters in brackets):


The four-line poem is is an epitaph by poet William Drummond. The last line on the memorial, in Latin, speaks of the grief of the husband.

But of course it is the coat of arms at the peak of the memorial which attracted me first. 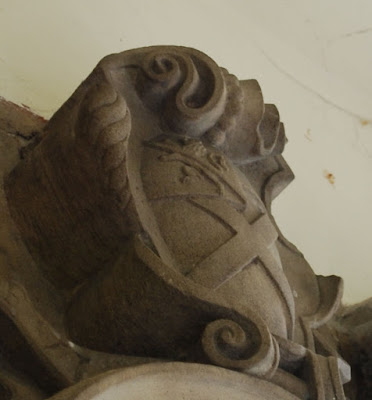 The arms here would be blazoned Or a saltire and chief gules on a canton argent a lion rampant azure armed and langued gules. There is a difference, though, which you can see more clearly on the larger photo (click on the photo above to see it), in that the lion on the canton is debruised by a ribband. I am not certain why the ribband is here. It does not appear on the tomb of her father (https://en.wikipedia.org/wiki/Edward_Bruce,_1st_Lord_Kinloss), nor can I find it in any other Bruce-related arms. And yet, there it is on her memorial here. Like so many other things in life, I guess it's a mystery.

Yet how special to see two separate monuments to a husband and wife, both beautifully carved, both armorial, in this old Scottish church in Linlithgow.