No, really! It isn't a surprise to find a model ship in a maritime museum.

Continuing our tour of the National Maritime Museum at Helsingør, Denmark, we came across the following ship model. 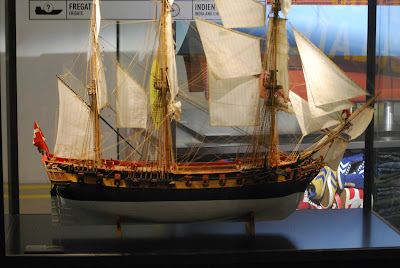 Explanatory texts with the model tell us that it is the Disco, a frigate built in 1778, one of the largest trading vessels of its time, voyaging to the East for tea, silk, and porcelain, at a time when such a round trip took about a year and half and was not without its dangers.

And why is all that of any interest to us? Well, it helps us to better understand the flag flying from the sternpost of the Disco. 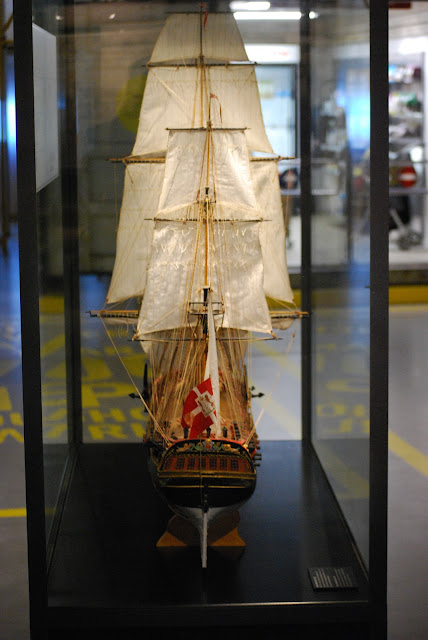 Here's a close-up of the flag. This image has been reversed to make reading it easier. 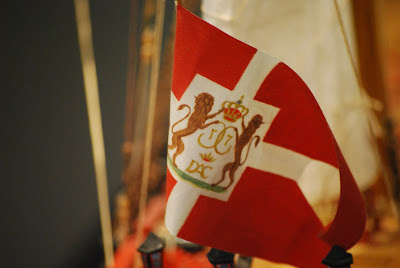 Here we see a swallow-tailed version of the national flag, the Dannebrog, and in the expanded white square the initials of the Danish Asiatic Company surmounted by a crown, and in pride of place, between two lions rampant guardant atop a grassy compartment and supporting a royal crown, the cipher of King Christian VII (who reigned 1766-1808), and whose armorial sarcophagus we have already seen in Roskilde Cathedral.
So finding this flag is almost like running across an old friend again, but this time on a painted flag on a model of a ship in a National Maritime Museum.
And how interesting all that is! Finding a quasi-heraldic flag of a king whose tomb we have visited, on a model of ship that led us to learning more about both the ship and the Danish Asiatic Company and its place in history.
Okay, if you, too, have now learned something new (and you should try to learn something new every day), then your duty is fulfilled and you can go take a nap now. I know I'm going to do so!
Posted by David B. Appleton at 2:00 AM