A Final Chapel in Roskilde Cathedral, The Glücksburger


Our final stop on our tour of armorial Royal burials in Roskilde Cathedral, we come to the Glücksburger Chapel.
This Chapel was built in 1924, inspired by Romanesque and Byzantine architecture, and named after the first king of the Glücksburger dynasty, King Christian IX. There are three double burials in this Chapel - King Christian IX and Queen Louise, King Frederik VIII and his Queen Louise, and King Christian X and Queen Alexandrine - but only the first is armorial. (Christian X and Alexandrine's stone coffins have finely carved Dannebrog flags that cover them.)

King Christian IX (d. 1906) (who reigned for 43 years) and Queen Louise of Hesse-Kassel (d. 1898) were initially buried in oak coffins in Frederik V's Chapel. The stone double sarcophagus in which they are now entombed, designed by Hack Kampmann, was felt to ruin the balance in Frederik V's Chapel, and so when the new Glücksburger Chapel was completed, their bodies were moved into it. 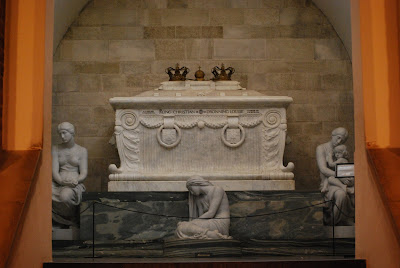 The double sarcophagus has two gold crowns adorning the top. The three female sculptures, by the sculptor Edvard Eriksen (who also did the famous statue of the Little Mermaid), surrounding it are Remembrance, Love and Grief.
On the side of the sarcophagus we find the Royal Arms of King Christian IX (to the left) and Queen Louise of Hesse-Kassel (to the right). 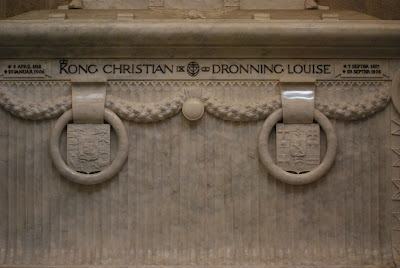 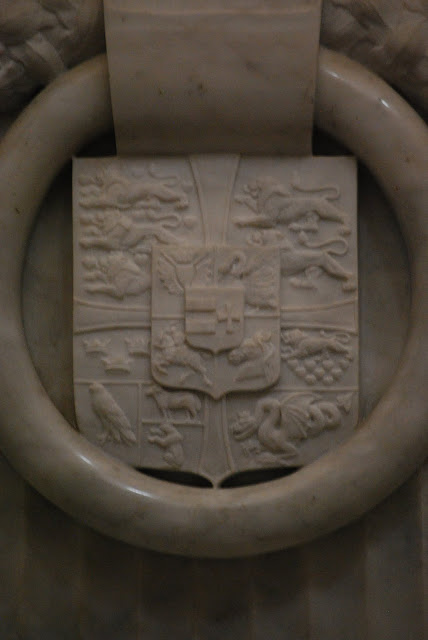 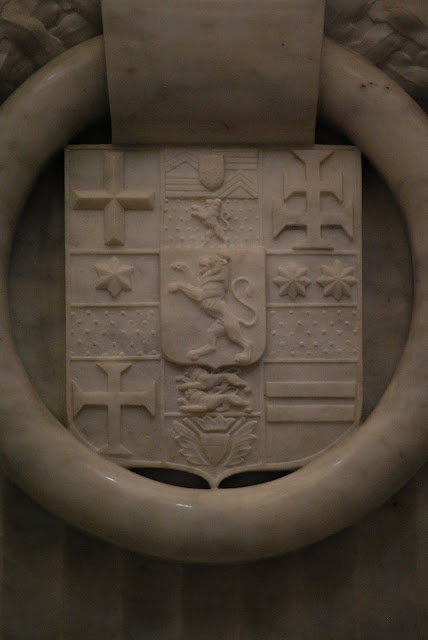 The style of the room and the carvings may be simpler than we have seen in some of the other Royal burials in the other Chapels in the Cathedral, but the arms are every bit as complex.
Just sayin'.
Posted by David B. Appleton at 2:00 AM