A recent grant of arms by the College of Arms in London has created a bit of a stir around the world.

In a number of news items (I'll include links at the end of this post), much discussion has been made of the grant of arms to Baron Aamer Sarfraz, a British-Pakistani businessman and member of the House of Lords.
This grant of arms breaks ground as the first such to incorporate the green dome of al-Masjid an-Nabawi (the Prophet's Mosque) in Medina, Saudi Arabia, a well-known landmark in the Muslim world.
Of this grant, Dr. Qibla Ayaz, Chairman of the Council of Islamic Ideology, said that "the British government has set an example of religious tolerance at the official level, which will further strengthen religious tolerance in the world." And Chairman of Interfaith Harmony and Peace Committee, Syed Izhar Shah Bukhari said that, it "is an expression of the fact that British society and culture openly recognise other religions and cultures."

Commenting on the grant, Lord Sarfraz said, “It is a great honour to have the mosque of Prophet Muhammad (PBUH) featured prominently on a Coat of Arms. “I would like to thank the Garter and the College of Arms for their excellent work,” he added.

In addition to the dome of the Prophet's Mosque on the shield, there are two heraldic supporters: a lion representing the UK, and a snow leopard representing Pakistan. The coat of arms also features the coronet of a Baron. The crest at the top of the Arms has the Himalayan Mountains, a nod to Islamabad, where Lord Sarfraz grew up. Finally, at the peak of the crest is a crescent, the symbol of Islam.
In a pretty glaring omission, none of the articles that I have seen actually included a depiction of the coat of arms. Fortunately, on Lord Sarfraz's web page, he has put up a depiction (https://www.lordsarfraz.com/coat-arms?fbclid=IwAR0GK9dkp_sW8ltBaiHeujE8QiaxUry8mzPaGi4AzVOBCkxFxE3Za4ks6Vs), below: 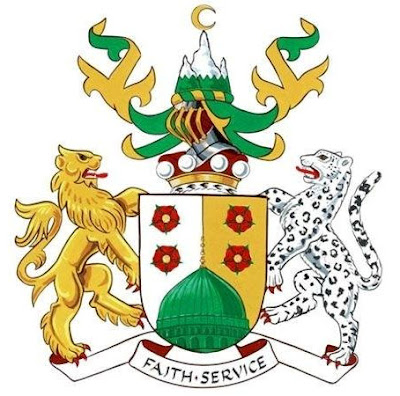 There has also been a fair bit of discussion on the Facebook page of the International Heraldry Society about how appropriate it is to place the depiction of a specific building on a coat of arms. One commenter there, Stephen Szabo, has responded to that criticism with several examples:

In 1969 the English Kings of Arms issued a confirmation of the arms assumed by Macquarie University, viz: "Vert the Macquarie lighthouse tower masoned proper in chief the star Sirius Or.
In 1893 the English Kings of Arms granted Sir Samuel Wilson "Per pale Sable and Gules a wolf rampant Or charged on the shoulder with an estoile Gules between four mullets in cross Or on a chief Or a representation of the end elevation of the Wilson Hall of the Melbourne University between two salmon naiant proper."

And this practice is not limited to Great Britain: for example, the arms of the Latvia student fraternity Fraternitas Academica includes a silhouette of the building of the University of Latvia (https://lv.wikipedia.org/wiki/Fraternitas_Academica?fbclid=IwAR1je6J9anMAZxv31anVMRAZVc35bRy3BBZLz_vYimkwY7OyPCU2nV6bw1Y). And the city of Borgholm, Sweden, has a specific building on its shield (https://www.heraldry-wiki.com/heraldrywiki/wiki/Borgholm?fbclid=IwAR3XLwMvur1g-mA24nmo1heDKqEsGLbvZ_4kLVNqgJCyXSMM6NBnu3I-3Es).
If you'd like to read more news articles about this grant of arms (though they all seem to be copying much of the story from the same news source), here are some of the links:
https://dailytimes.com.pk/865216/uk-grants-first-ever-official-coat-of-arms-featuring-masjid-e-nabvi/
https://www.dawn.com/news/1668003/pakistan-origin-peer-receives-uks-coat-of-arms
https://www.thenews.com.pk/print/923161-uk-grants-first-ever-official-coat-of-arms-featuring-masjid-e-nabvi?fbclid=IwAR27AwHTEUyu8K4aBSspimDa5CSmTupWDkHBCUfZKzKuDjszR5zR7USATek
https://www.dawn.com/news/1668003/pakistan-origin-peer-receives-uks-coat-of-arms
Posted by David B. Appleton at 2:00 AM

Email ThisBlogThis!Share to TwitterShare to FacebookShare to Pinterest
Labels: College of Arms, Pakistan