American Heraldry in a Danish Museum


So there we were, enjoying our time at the Danish National Maritime Museum in Helsingør, when what do you know? I see some American heraldry in a display cabinet. 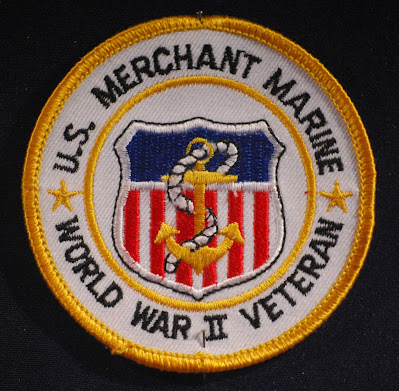 The legend around the circumference tells you everything you need to know about what this represents, and obviously, it was given to the Museum from a veteran who served in the Merchant Marine of the United States during World War II.
The shield is, in fact, the arms of the United States, Paly of thirteen argent and gules a chief azure (no stars on the chief!) with, overall, an anchor or fouled argent, the whole being the arms of the Merchant Marine of the United States.
This coat of arms can also be seen on the flag of the U.S. Merchant Marine on their website at http://www.usmm.org/
I have to admit, I was not expecting to find American heraldry in a Danish maritime museum. Just goes to show that, once again, you can find heraldry (from just about anywhere) everywhere!
Posted by David B. Appleton at 2:00 AM