I'm sure that some of you, at the very least, noticed that I did not include today's armorial plaque of a famous World War II figure in my last post.

The reason is that I wanted to give him a review with a little more detail and some of the background leading up to this plaque.

I am referring, of course, to this man: 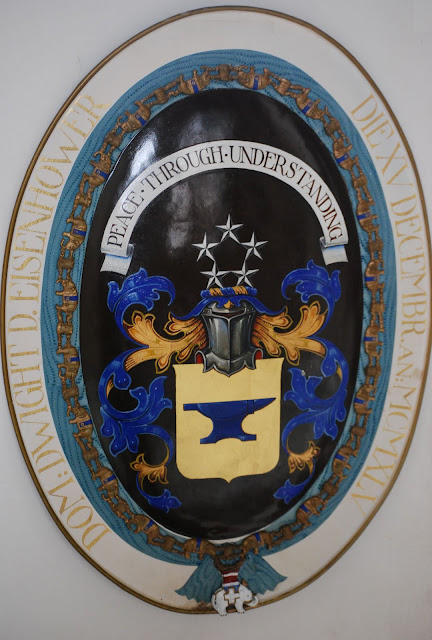 This is the armorial plaque of General Dwight D. Eisenhower, Supreme Allied Commander of the Allied Expeditionary Force (SHAEF), later President of the United States of America (1953-1961). He was created a member of the Order of the Elephant in 1945 (though the plaque was not made then, but sometime after his election as President.

Nice, beautifully simple arms. Even a loose "cant" on his name, which means "iron hewer", or blacksmith. The crest is the five stars of his rank as General of the (U.S.) Army. Above the crest is his motto, Peace Through Understanding.
Ah, but this is not the design that he originally submitted for his plaque (though some elements were retained). Oh, no, what he said he wanted was one of the far too typical quarterly shields of what I call the school of "resumé heraldry" or "kitchen sink" heraldry, since it seems to have just about everything of note he ever did on it, including the proverbial "kitchen sink."
You can click on the image below to see a larger version, where the various symbols on the shield are discussed.
In brief, however, we have: Quarterly: 1, the President of the United States; 2, the seal of Columbia University, where he has served as President; 3, the insignia of the Supreme Headquarters Allied Powers in Europe (SHAPE); and 4, the insignia of the Supreme Headquarters Allied Expeditionary Forces (SHAEF); overall, an inescutcheon Or an anvil azure (Eisenhower). 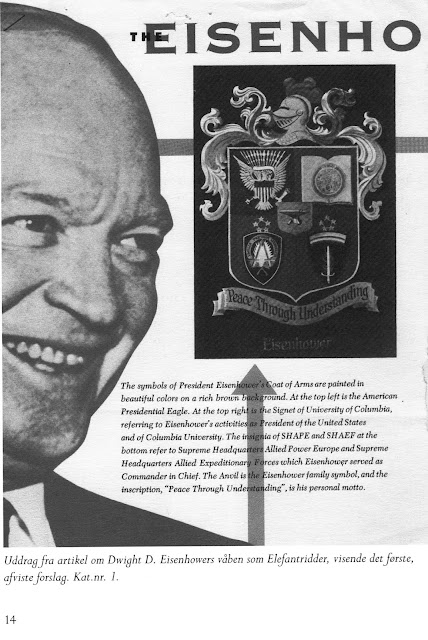 I can only remain grateful to the Danish heralds who managed to convince him to simplify, simplify, simplify, his arms. I think you will agree that the final result is just as indicative of the man and his career, without the clutter (and pretentiousness) of what he started with.
Can I get an "Amen"?
Posted by David B. Appleton at 2:00 AM