Some Members of the Danish Royal Household and Their Spouses

Now we come to the armorial plaques of some members of the royal family of Denmark, and their spouses. 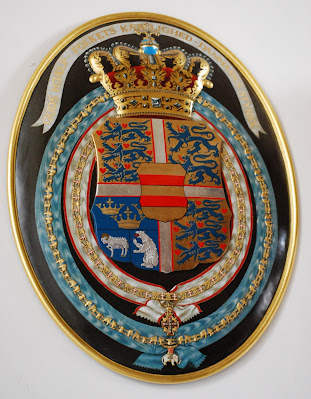 The arms on the plaque above are, obviously, the arms of the King (or Queen) of Denmark, though with no date on the plaque, I can't tell you just offhand which one. Note, however, that the shield is surrounded with the sashes and collars of both Order of the Elephant and the Order of the Dannebrog.
(Maybe Mel Brooks, in his History of the World, Part 1, was right: "It's good to be the king!") 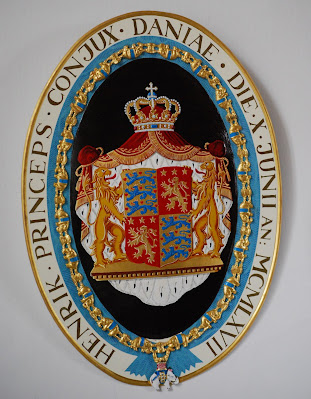 Here we find the armorial plaque of His Royal Highness Prince Henrik of Denmark (born Henri Marie Jean André de Laborde de Monpezat) (1934-2018). He was the husband of Queen Margrethe II of Denmark. He served as her royal consort from her accession on January 14, 1972 until his death in 2018. He was created a member of the Order in 1967, the year he married heir presumptive Princess Margrethe. 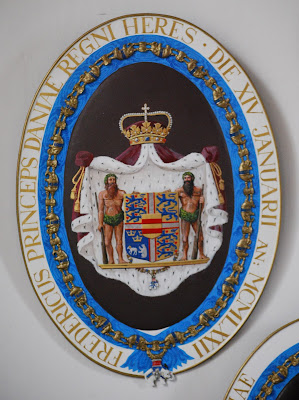 Here, on his own plaque, we have the arms of Frederik, Crown Prince of Denmark, Count of Monpezat. 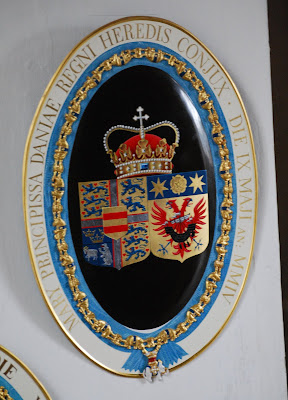 And here, displayed with the arms of his wife, we find the arms of Frederik, Crown Prince of Denmark, Count of Monpezat, and Mary, Crown Princess of Denmark, Countess of Monpezat, R.E. She was born Mary Elizabeth Donaldson. Because Frederik is the heir apparent to the throne of Denmark, when he succeeds she will automatically become Queen Consort of Denmark.
The gold field with the eagle gules and ship (specifically, a lymphad) sable (though it appears they gave the eagle a second head) both symbolize her Scottish ancestry from the clan MacDonald is set on a field of gold. The chief of the shield is azure and shows two gold Commonwealth (seven pointed) stars from the coat of arms of Australia, and a golden rose in between.
The MacDonald arms (without the charged chief) can be seen on the tabard of the Finlaggan Pursuivant (in the center of the picture below, taken when Adam Bruce was Finlaggan). 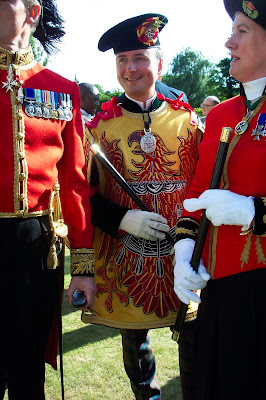 The office of Finlaggan Pursuivant is currently held by Thomas Miers, who was appointed at a ceremony in Edinburgh in July 2009. Miers succeeded the Hon. Adam Robert Bruce following his appointment as Unicorn Pursuivant at the Court of the Lord Lyon King of Arms of Scotland. Bruce was appointed by Godfrey James Macdonald, 8th Baron Macdonald of Slate, Chief of the Name and Arms of Macdonald and High Chief of Clan Donald. This post was revived in 2005, after 510 years, in a ceremony attended by Ross Herald of Arms in Ordinary from the Court of the Lord Lyon and the four MacDonald chiefs. 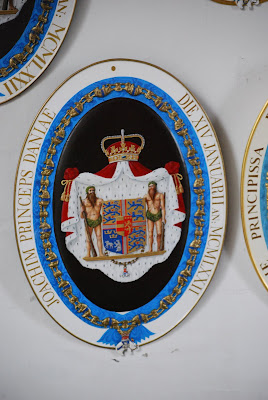 Next, we come to the arms of Prince Joachim of Denmark, Count of Monpezat. Joachim is the younger brother of Crown Prince Frederik. (The title Count of Monpezat descends to all male descendants of their father, H.R.H. Prince Henrik (above).) 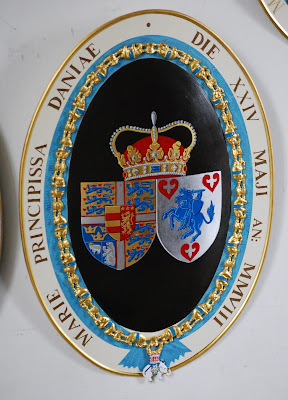 And here are the arms of Prince Joachim of Denmark, Count of Monpezat, and Princess Marie. Her arms were granted in 2010. A horseman, representing her maiden name Cavallier (meaning knight or horseman) is depicted in blue on a silver shield. The secondary charges are a combination of the Danish and French national symbols; a heart and a fleur de lys. Three red hearts (symbolizing Denmark) are cut with the fleur-de-lis (symbolizing France). 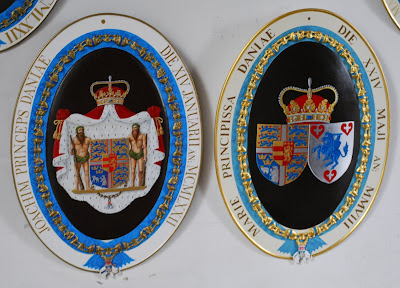 And finally, we have their two plaques, side-by-side.