Some Armorial Plaques with WWII Connections


Continuing our look at some of the armorial plaques of members of the Order of the Elephant in the upper level of the chapel at Frederiksborg Castle, we come now to a few members who played large roles in the World War II.

Because these people are so very well-known, I am going to assume here that I don't really have to tell you who they are, beyond noting their names.

Even though the pictures here are of individual plaques, please feel free to click on an image to see a larger, more detailed photograph. 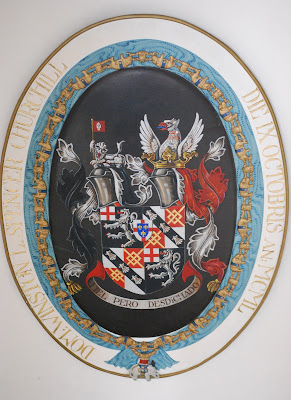 First, and likely the most well-known, we have the arms of Winston S. Churchill, Prime Minister of England during the war. He became a member of the Order of the Elephant in 1950. 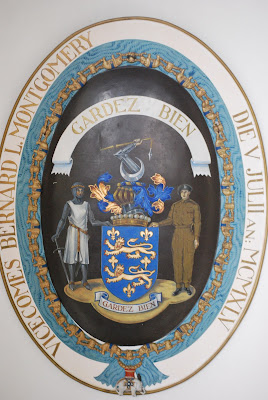 Next, we have another Briton, Field Marshal Bernard Law Montgomery, 1st Viscount Montgomery of Alamein. His title as Viscount comes from his victory in the battle in North Africa, the second battle of El Alamein, Egypt, where Montgomery and the British 8th Army pushed back German Field Marshal Erwin Rommel and the Afrika Korps, eventually leading to the defeat and surrender of Axis forced in North Africa in May 1943. Montgomery was made a member of the Order in 1945. 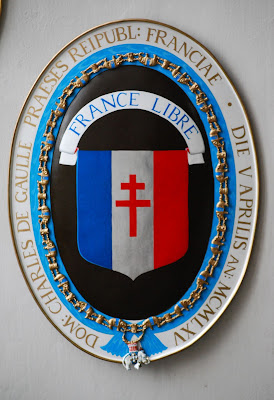 And finally, we have the plaque of General Charles de Gaulle, one of the leaders of the Free French forces in WWII, and President of the French Republic (1959-1960). He was created a member of the Order in 1965.
The arms are not personal arms, but consist of the French tricolor (blue, white and red) on a shield, charged in the center with the cross of Lorraine, a widely-used symbol of French resistance to the Nazi occupation during the war.
Yes, I know that I've left out one other famous WWII general who was created a member of the Order of the Elephant from the august company here. I didn't forget him; we'll take a more detailed look at his plaque, and some of the background  to it, in our next post. See you then!