Continuing our look at some of the shields of members of the Order of the Elephant in Frederiksborg Castle, here are some more dating to the 18th and 19th Centuries.

Again, I'm not going to blazon many of these multi-quartered coats of arms. You may, however, click on any of these images to see a larger, more detailed photograph of these arms, and you can also see detailed paintings of these arms in the Arms Books of the Order of the Elephant, which can be found on-line at https://www.kongehuset.dk/vaabenboeger

So today, we have for you: 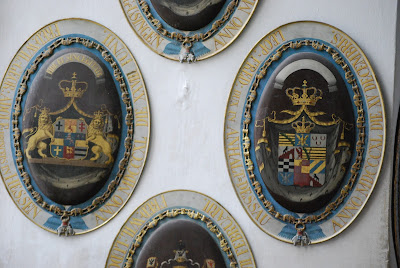 On the left: Frederick William George Adolphus, Landgrave of Hesse (1820-1884), created a member of the Order in 1840. He was born in Copenhagen, and moved with his family to Denmark at the age of three, where he grew up. In 1843 he was third in line for the Danish throne after the King's son and brother, Prince Ferdinand, his mother being Princess Louise Charlotte of Denmark (1789–1864), the daughter of Hereditary Prince Frederick of Denmark and Norway (1753–1805). His arms have only nine quarters! 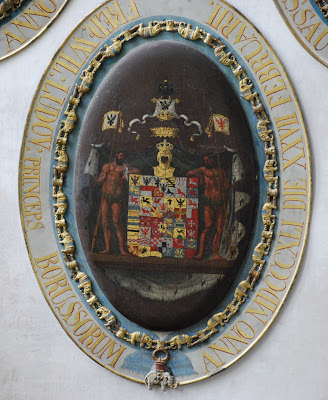 Now we come to the arms of Frederik Wilhelm Ludwig (which in truth ought to be Wilhelm Friedrich Ludwig), Prince of Borussum (Prussia) (lived 1797-1888; created a member of the Order in 1841). He became King of Prussia in 1861, and German Emperor in 1871. His arms, like those of Frederik Wilhelm IV, his father, who plaque we saw in our last post, also say “Look at all the stuff I own!”, with 48 quarters, plus four (count ‘em, four!) inescutcheons. 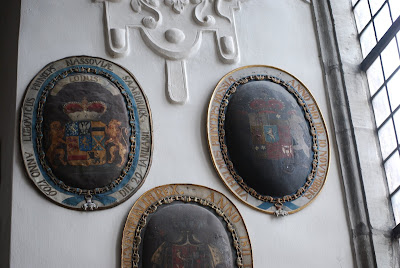 On the left, we find the arms of Louis, Prince of Nassau-Saarbrücken (1745-1794; created a member of the Order in 1769). Quarterly of seven and an inescutcheon
To the right, the arms of Wilhelm, Landgrave of Hesse (William IX, Landgrave of Hesse-Kassel, ruled 1785-1821) (created a member of the Order in 1810). His mother was Princess Mary of Great Britain, the daughter of George II. In 1764, William married his first cousin, Wilhelmina Caroline of Denmark and Norway (1747–1820). William's younger brother Charles in 1766 married another of their Danish first cousins, Princess Louise of Denmark. His son and successor, William II, Elector of Hesse, became a member of the Order of the Elephant following his father's death in 1821. The arms are quarterly of seven, the sixth quarter being quartered with an inescutcheon, plus inescutcheon overall. 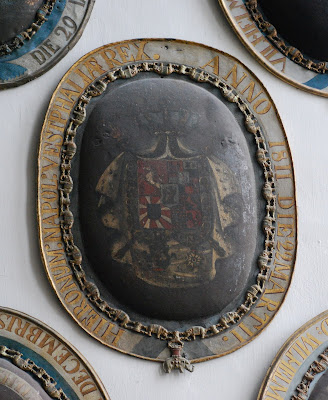 And here we have the arms of Hieronymus Napoleon, King of Westphalia (created a member of the Order in 1811). Jérôme-Napoléon Bonaparte (born Girolamo Buonaparte; 1784–1860) was the youngest brother of Napoleon I and reigned as Jerome Napoleon I (formally Hieronymus Napoleon in German), King of Westphalia, between 1807 and 1813. His arms are quarterly of four, with two of them being grand quarters (that is, each quarter is also quartered), one with an inescutcheon, and an inescutcheon of Bonaparte (Azure an eagle displayed standing atop a thunderbolt fesswise all or) overall. 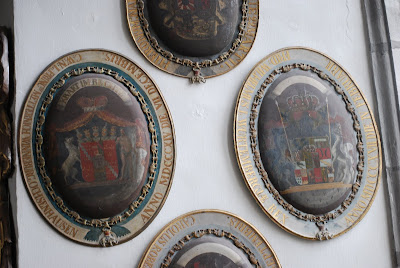 In this picture, on the left we have the plaque of Clemens Wenceslaus Nepomucimis Lothar, Prince Metternich-Winneburg-Ochsenhausen (Klemens Wenzel Nepomuk Lothar, Prince of Metternich-Winneburg zu Beilstein) (1773-1859), created a member of the Order in 1814. He was the Austrian Empire's foreign minister from 1809 and Chancellor from 1821-1848. His arms are uarterly of four with two other arms as a pale with an inescutcheon crowned.

And finally, on the right, the arms Friedrich Wilhelm Karl (1781–1864), King of Württemberg from 1816-1864 (created a member of the Order in 1817). Once again, arms that say "look at all the stuff I own," including a crowned inescutcheon. If you look carefully, you may recognize some of the quarters from photographs of the arms of Württemberg that we reviewed some time back.
Posted by David B. Appleton at 2:00 AM