More 19th Century Members of the Order of the Elephant


This next selection of armorial plaques of members of the Order of the Elephant in Frederiksborg Castle brings us a wider variety of nationalities.
As ever, and especially for any plaques which may be dark and harder to see, please click on an image to go to a larger, more detailed (and often more visible) photograph. 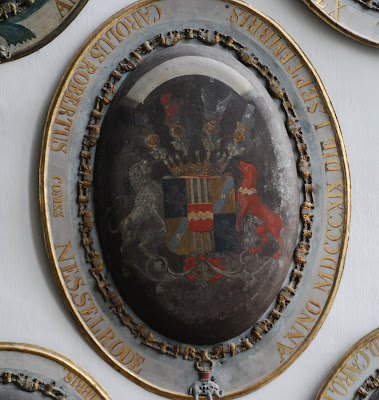 First, we have the armorial plaque of Karl Robert Reichsgraf von Nesselrode-Ehreshoven, more commonly known as Charles de Nesselrode (1780- 1862) (created a member of the Order in 1819). He was a Russian German diplomat. For forty years (1816-1856) Nesselrode as Foreign Minister guided Russian policy; he was a leading European conservative statesman of the Holy Alliance. 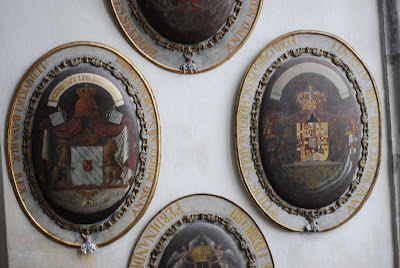 Here, on the left we have the arms of Ludwig I or Louis I (1786-1868), king of Bavaria from 1825 until the 1848 revolutions in the German states. (He was created a member of the Order in 1825.)
On the right, we see the arms of Ferdinand Charles (Ferdinando Carlo), Crown Prince of Naples and Sicily ("the Two Sicilies"), created a member of the Order in 1829. He later ruled as Ferdinand II, King of the Two Sicilies. 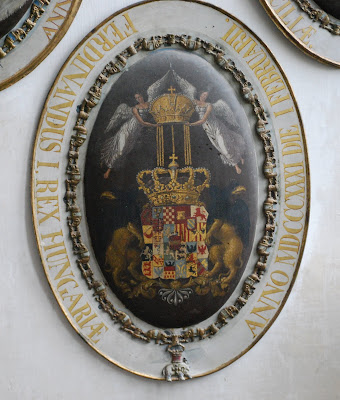 Next, we have the arms of Ferdinand I (1793-1875), the Emperor of Austria from March 1835 until his abdication in December 1848. As ruler of Austria, he was also President of the German Confederation, King of Hungary, Croatia and Bohemia (as Ferdinand V), King of Lombardy–Venetia and holder of many other lesser titles. (created a member of the Order in 1831) 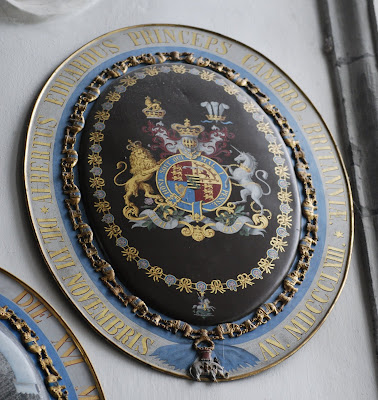 Then we come to the arms of Albert Edward, Prince of Great Britain (1841-1910), later King Edward VII, King of the United Kingdom of Great Britain and Ireland and the British Dominions, and Emperor of India from 1901 until his death in 1910. (He was created a member of the Order in 1863.) 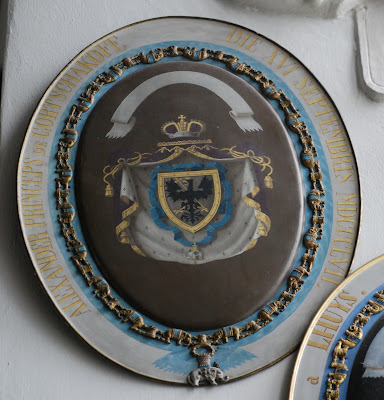 Next we we find Prince Alexander Mikhailovich Gorchakov (1798-1883), a Russian diplomat and statesman from the Gorchakov princely family. He has an enduring reputation as one of the most influential and respected diplomats of the mid-19th century. As Foreign Minister of the Russian Empire, he was preceded by Karl Nesselrode, above. (He was created a member of the Order of the Elephant in 1857). 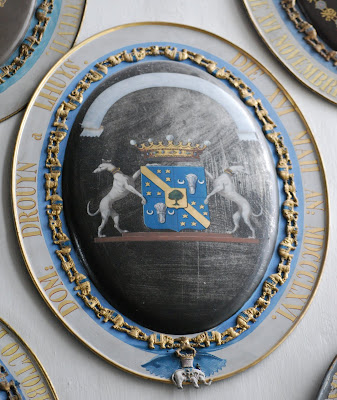