(At Long Last!) The Final Armorial Plaques of the Order of the Dannebrog


I know you think it's been a long time coming, but today we have the final pictures of armorial plaques of members of the Order of the Dannebrog. (But never fear! We aren't done with the heraldry in Frederiksborg Castle yet. Next time we're going to start on the other aisle on this floor of the Chapel, the one displaying the armorial plaques of the members of the Order of the Elephant.)

But for today, these are the plaques on the other side of the window alcove from the ones we looked at in our last post, all inducted in 1959 and 1960. 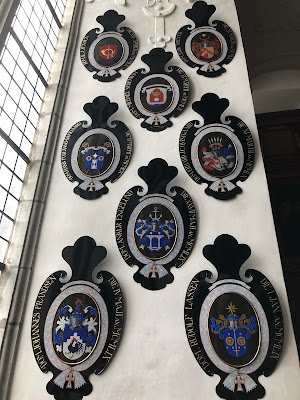 Once again, you can click on an image to see a larger, more detailed picture. And, as always, the blazons offered here are my own.
Starting at the top left, and then going from left to right, and then down, we have the armorial plaques of:
Kristjan Johannes Jensen (1890-1961, inducted in 1960), Director General of the Danish postal service: Gules an arrow palewise point to chief argent overall a hunting horn or. 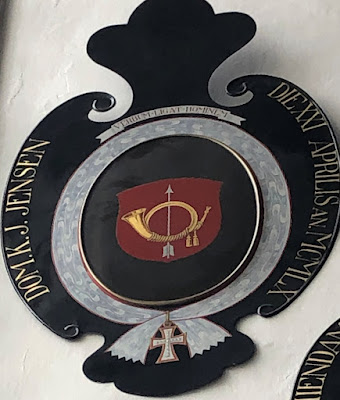 Erik Dreyer (inducted in 1960): Per pale gules and or a chevron counterchanged in dexter chief an escallop argent. A Google search for Erik Dreyer came up with way too many people who could not be or have been this Erik Dreyer. 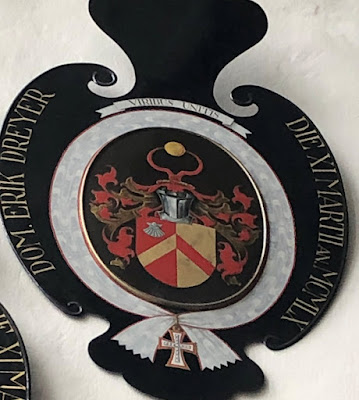 Michael Nicolai Neiiendam (1895-1962, inducted in 1960), Danish theologian: Argent on a gabled house gules atop a foundation argent masoned sable issuant from a base wavy azure, an owl displayed or grasping in its talons an open scroll argent with a seal pendent therefrom or. 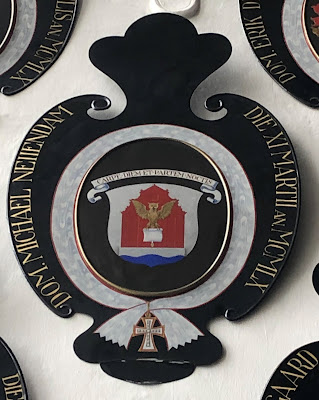 Hans Fuglsang-Damgaard (1890-1979, inducted in 1960), bishop of the diocese of Copenhagen: Azure in pale a mullet of four greater and four lesser points or and an hourglass argent, the lower half of the mullet between two Luther roses argent, heart gules and Latin cross sable. 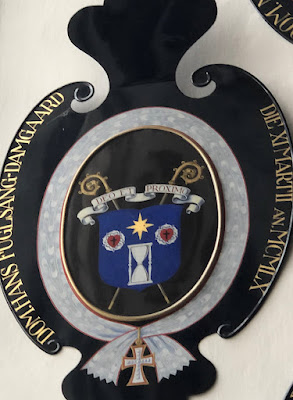 Erhard Jorgen Carl Qvistgaard (1898-1980, inducted in 1960), Danish admiral, first Danish Chief of Defense: Per saltire gules, argent, argent and sable, in chief a crane in its vigilance argent, in dexter flank an arm in armor brandishing a sword sable, in sinister flank a scythe and a spade in saltire sable handled gules, and in base three bees(?) fesswise one and two or. 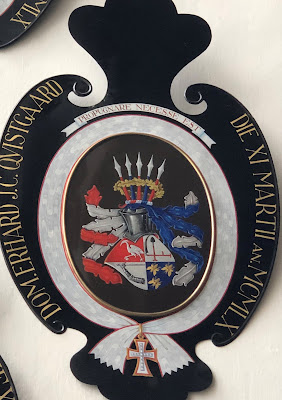 Anker Dolleris Engelund (1889-1961, inducted in 1959), civil engineer and university professor: Azure a bridge of one and two-half arches issuant from a base wavy of four traits wavy argent and azure in chief two mullets of six points or. 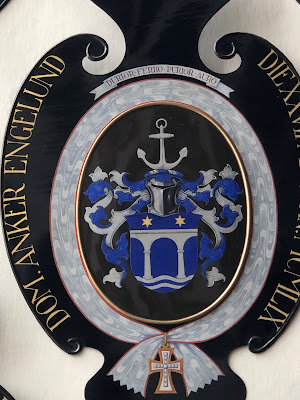 Johannes Frandsen (1891-1968, inducted in 1959), Medical Director, National Board of Health’s medical council, member of Parliament, President of the Danish Red Cross: Per chevron grady azure and argent in base a rooster azure combed and wattled gules beaked and legged or. 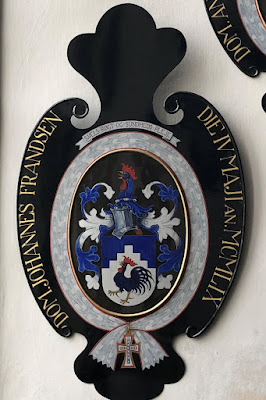 Rudolf Lassen (1882-1973, inducted in 1959), Permanent Secretary of the Ministry of Health and The Ministry of Social Affairs: Azure a sword palewise proper between two roses in fess all between seven mullets of six points, one, two, and four or. 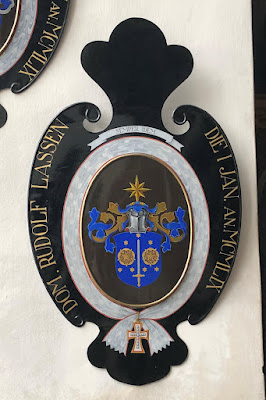 Next time, the Order of the Elephant!
Posted by David B. Appleton at 2:00 AM